Miami Bound proved too good for the boys in Saturday’s Group 2 Moonee Valley Cup (2500m) thanks to another well-timed ride from Jamie Kah.

The 2019 Group 1 Kennedy Oaks winner was one of the longest priced winners of the day lobbing at $26.00 in Ladbrokes’ market as she gave long-time admirers something to finally cheer about.

On pace proved the place to be during the previous races, but Kah chose to follow her own pattern by settling dead last in the middle stages before tracking out wide to swoop in on Shared Ambition and Oceanex with 100m to go.

After a disappointing last start when sixth of of nine in the Group 2 Herbert Power (2400m) at Caulfield where she was trapped on the fence, Kah said the extra running room on Saturday proved the difference.

“She actually didn’t really like being on the rail last start. Daniel Moore actually said to me that the horse is flying and I thought I’d call him a bad judge after last start, but like I said, I don’t think she liked being crowded and today she got a beautiful run down the back straight and it was a really tough win” Kah told racing.com.

“I never really wanted to go inside horses then, because of last start. I was happy to sort of bide my time and come out wide on her, she is flying and she’s going super and so is the team.” 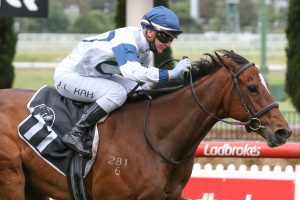 Danny O’Brien’s New Zealand import was completely overlooked in the market having failed to find the money since her win in the Oaks last November, but did look a sneaky each-way chance having won two of her three runs on soft tracks previously.

O’Brien said after the race that the step up to the mile and a half has also done her good with the stable now set on a spot in this year’s $7.75 million Melbourne Cup (3200m) in a fortnight’s time.

“I’ve been very happy with her all Spring to be fair, but she’s a much better horse when she gets out in distance to a mile and a half at least and obviously she grows a leg in the soft” O’Briend said.

“A few things went in our favour today but we’re thrilled to see her win again, she gave us a great thrill last Spring in the Oaks and it’s still a big effort to come back here and beat all the boys in the Moonee Valley Cup.”

Miami Bound will carry just 51kg in the Cup and is looking to become the fourth horse to complete the Gold Cup-Melbourne Cup double in the same year since Kingston Rule did it way back in 1990.
O’Brien’s four-year-old New Zealand import has firmed from $201 into $51 in Ladbrokes’ Cup market alongside Saturday’s second place-getter, Shared Ambition.