The 2020 Melbourne Cup is officially here!

We’ll be providing up to the minute results and analysis on all 10 races, including the $7.5 million ‘race that stops a nation’ at 2pm (AEDT).

Finance Tycoon took out the Group 3 Darley Maribyrnong Plate (1000m) to cause an early upset down the Flemington straight. 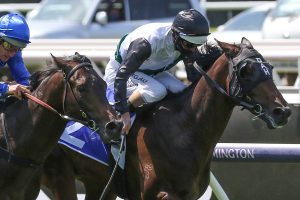 The son of Written Tycoon finished second on debut at Flemington a fortnight ago behind General Beau and was the late market mover firming from $9.50 into $7.50 with Ladbrokes.

Trainer Ben Hayes opted to race with the blinkers for the first time, a gear change that proved the trick on the $150,000 purchase.

Ingratiating came into as short as $1.85 before the jump in what was a disappointing start for favourite punters.

Marine One also showed plenty of kick on the inside to grab third.

The upsets continued nice and early with the Archie Alexander-trained No Restriction getting up at 40-1 to win the Listed Desirable Stakes (1400m).

Much like Finance Tycoon in the first, the winkers going on made a difference as the daughter of Unencumbered raced out wide to beat home a strong field of fillies for her second race win.

Race favourite Joviality was the big loser due to a controversial ride from James McDonald off the speed.

Alexander said after the race that No Restriction will now head back to the paddock.

The Richard and Chantelle Jolly team continued their brilliant run of form on Cup Day thanks to Alleboom’s win in the Schweppervescence Plate (1000m).

The colt by Spirit of Boom raced every bit like the $3.70 favourite, charging down Hard Landing on the outside over the final 100m to secure his third win in his Melbourne debut.

A patient ride from Craig Williams proved the difference, while Hard Landing likely gained a few admirers holding on for second following two disappointing runs at Group level prior.

Sin to Win broke his three-year winless streak in the Macca’s Run as Luke Currie turned back the clock in a brilliant staying performance.

The Lindsay Park-trained galloper hasn’t been far off at all this year and always looked the winner rounding the turn out wide.

Freedman-trained colt Ain’tnodeeldun made it a hat-trick of wins in the Listed TAB Trophy (1800m) holding off a late charging Confrontational to the line.

The son of Dundeel won back-to-back starts at Sale and Morphettville leading into the race and was installed as the $1.95 favourite despite jumping from the wide draw.

A beautiful ride from William Pike has seen Outrageous take out the Grinders Coffee Roasters Trophy first-up from a spell.

The son of All Too Hard was aided by the inside draw as Pike stoked him up over the final 200m to beat home the charging Ocular and The Difference.

Outrageous had a strong record to his name when racing fresh, but it appeared punters were happy to look elsewhere with the five-year-old jumping at $9.00 odds.

The win also gives Pike plenty of confidence heading into the Cup aboard Steel Prince in an hours’ time.

Twilight Payment brained them to win the 2020 Melbourne Cup thanks to a beautiful front-running ride from Jye McNeil.

The eight-year-old secured trainer Joseph O’Brien’s second win in the great race and was also a handy fill-up for punters that took the $26.00 odds on offer.

For complete analysis of the race, be sure to read our 2020 Melbourne Cup recap here.

Purple Sector proved a punters pal in the Listed Furphy Plate beating home Gold Fields and Odeon in a sprint to the line.

Craig Williams proved the difference Odeon getting on the whip rounding the final turn to keep his ride in touch with the rest of the field. 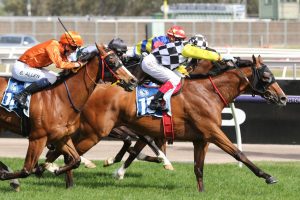 Purple Sector was one of the best backed runners of the day racing at $2.30 odds and has now won back-to-back starts.

Patience proved the trick from the winning jock as the mare by Written Tycoon exploded over the final 100m to run down Lyre.

The Busuttin and Young-trained four-year-old was paying 21-1, continuing a long trend of roughies getting up throughout the day.

Godolphin got a late win on the board in the last with Snitzel mare Exhilarates.

Jockey Kerrin McEvoy stoked the four-year-old up down the middle of the straight and went toe-to-toe with The Astrologist in a head-bobber to the line.

Exhilarates was paying a cool $7.50 in the market, a nice little ‘get out of jail free’ card for anyone looking to dig themselves out of a hole.