A capacity field of 24 will line up in Tuesday’s $7.5 million Lexus Melbourne Cup (3200m) hoping to etch their name among the immortals in the famous race that stops a nation.

This year’s field will feature a German flavour after the Andreas Wohler-trained Ashrun earned the final slot by winning Saturday’s Group 2 Hotham Stakes (2500m) thanks to a patient ride from Kerrin McEvoy.

Wohler won the 2014 Melbourne Cup with fellow German raider Proectionist, while McEvoy is searching for his second Cup aboard early favourite Tiger Moth.

The Aidan O’Brien-trained Irish raider finished second in the Group 1 Irish Derby back in June, but will have plenty of work to do after drawing barrier 23 – a gate that hasn’t produced a winner since Van der Hum’s triumph way back in 1976. 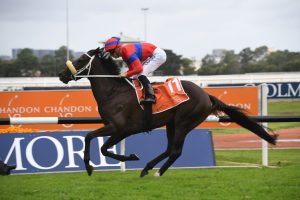 Verry Elleegant aims to cap off an incredible Spring with a seventh Group 1 in Tuesday’s Melbourne Cup, Photo: Steve Hart.

Tiger Moth’s stablemate was huge in his Australian debut when second to Verry Elleegant and seemingly had luck on his side when drawing barrier three on Saturday, a gate that has produced six total winners in the past.

Speaking of Verry Elleegant, Chris Waller’s now six-time Group 1 winner will make her Melbourne Cup debut from the awkward barrier 15 – a draw that seemingly hasn’t fazed the bookies with her price firming from $13 into $11.

After overcoming the wide draw last year, the five-year-old will have less work to do this time around having drawn barrier 4, but still remains out of sorts with the bookies at $41 following a disappointing preparation.

Fortunately, O’Brien’s best chance comes in the form of Russian Camelot, who will need to follow in Vow and Declare’s footsteps by overcoming the sticky draw.

The South Australian Derby winner drew barrier 16 on Saturday, leaving plenty of questions left to be answered regarding race tactics after the son of Camelot struggled from the carpark when third in the Cox Plate.

Of the internationals, Dashing Willoughby will slot in from gate 19 with Stratum Albion drawing the favourable barrier number 9, a gate that has produced four winners in the past including Efficient back in 2007.

An interesting subplot to follow leading into Tuesday’s is that of Prince Of Arran.
The Charlie Fellowes-trained eight-year-old has found the placings in back-to-back Melbourne Cup’ and has drawn the same gate namesake Prince of Penzance famously won from back in 2015.

A win for Prince of Arran would make him the 10th horse to win the Cup after placing in one previously and he certainly showed plenty of merit when fourth in his retune to Australia behind Verry Elleegant in the Caulfield Cup.

The final point of interest is of course, Sir Dragonet.

Ciaron Maher and David Eustace are hoping to not only win their first Melbourne Cup, but also follow in Makybe Diva’s footsteps by becoming just the sixth trainers to win the Cox Plate – Melbourne Cup double.

Jockey Glen Boss, who famously rode Makybe Diva to that double, said last week that he feels the son of Camelot could be even better over further. In an ironic twist of fate, Sir Dragonet has drawn the same gate Makybe Diva won from in barrier 14.