Champion jockey Craig Williams is hoping to become the first hoop since Glen Boss to secure back-to-back wins in Tuesday’s Melbourne Cup when he saddles Surprise Baby in the $7.5 million race that stops a nation.

Williams, who won the race last year in a homegrown upset aboard Vow and Declare, has been tasked with Paul Preusker’s six-year-old in what is shaping up to be one of the most exciting editions of the great race.

After overcoming barrier 21 last year, Williams will have a little less work to do this time around after drawing gate 7 on Saturday.

Surprise Baby remains a $9.00 chance in Ladbrokes’ Melbourne Cup market, and like usual, Williams is confident in his chances.

“I think it’s really important to have a good barrier draw, I spoke to Paul (Preusker) yesterday and he said he’s really delighted by the way Surprise Baby has trained on, we’ll have another discussion later today, but really looking forward to tomorrow,” Williams told RSN on Monday morning. 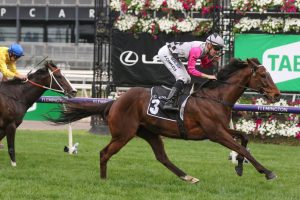 Surprise Baby is one of eight runners returning to the Cup after finishing fifth last year.

Like Vow and Declare, the son of Shocking had a ton of work to do from barrier 20 but still showed an enormous turn of foot to charge the line out wide.

Williams has ridden Surprise Baby in each of his two starts this prep, which includes a runner-up behind Humidor first-up in the Group 2 Feehan Stakes (1600m) followed by a disappointing ninth in the Group 1 Turnbull Stakes (2000m).

The world-class jock is hoping to see some improvement from Surprise Baby third-up but wasn’t entirely sure if he’ll go forward or sit back off the speed.

“I hope I have those options, when I’ve ridden him in his two runs this preparation at a mile and at ten furlongs he really didn’t have the gate speed, but now out to two miles it’s a completely different race” Williams said.

“I’ve been on him enough times now to get a really good understanding of him, but he did put himself closer leading in the first 300m when he got into the Melbourne Cup last year by winning the Bart Cummings, so I hope I have those options going into it.

If I don’t he might find himself a bit further back, but it’s nice to have a good barrier draw, we’ll have a plan and see how we assess things and I guess he’ll make the decisions for us in the final stages of the race.”

Fine weather should only strengthen Surprise Baby’s chances and he certainly looks a very strong each-way bet for the second year in a row.

Coming off a brilliant win on Saturday aboard September Run in the Group 1 Coolmore Stud Stakes, there’s perhaps no better jockey than Williams to have on board.