Trainer Phillip Stokes convinced connections to roll the dice once more with the sales-bound Music Bay and it paid off with the mare adding to her value at stud with an upset win in the $110,000 Leilani Series Final (1400m) at Flemington on Saturday. 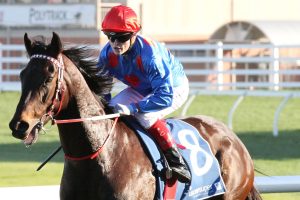 Craig Williams (pictured on Ulmann at Caulfield) made it a double on Finals Day at HQ on Music Bay in the Leilani Series Final. Photo: Ultimate Racing Photos.

The sixth race on the Finals Day card at HQ saw jockey Craig Williams make it a double following his win one event earlier aboard The Kosciuszko hope Lord Von Costa in the $128,000 Listed All Victorian Sprint Series (1200m).

Williams likely wrapped up this season’s premiership with another victory, this time on four-year-old Choisir mare Music Bay who broke a lengthy winning drought in her final start before retirement.

It had been 426 days since her last win when, with Williams aboard, she took out the Group 2 Queen Of The South Stakes (1600m) at Morphettville in May of last year.

Williams gave her an absolute peach of a ride in the Leilani Series Final, getting her into a lovely position in the run going forward from where she was able to kick away at the top of the straight and prove far too strong for her competition.

“Craig knows her won on her in Adelaide in the Group 2 very rewarding win this,” Stokes told the media post-win.

“She’s been going better than it looks on paper.

“I convinced them [the owners] to roll the dice one more time and it’s paid off.”

Music Bay put the writing on the wall last start running third only quart-length off the winner Great Duchess at the same track and distance on June 20 in one of the heats and, escaping a penalty for the Final, produced a dominant win.

Having bolted home over the closing stages, Music Bay ($11) had two and three-quarter lengths to spare over the Jason Warren-trained runner-up La Tigeresa ($2.90) who ran second as the beaten favourite.

In a close third was Soaring Eagle for David Brideoake who added value to the trifecta producing an eye-catching run as a 40/1 shot in betting.

Music Bay ran her last race in the Leilani Series Final and now heads up to Queensland for the broodmare sales on the Gold Coast.

“She’ll be very sort after,” Stokes, who celebrated his 100th win for the season with the result, added.