Jockey Barend Vorster rode a winning double at Morphettville on Saturday, following up his brave ride aboard Shrouded In Mist with another all the way win on Xilong in the Group 2 Euclase Stakes (1200m) less than an hour later.

Vorster again chose to move right up on speed out of the gates to set a helter-skelter pace from the front. He found himself with plenty of horse left underneath him rounding the turn, before Xilong held on over the final furlong to beat home the fast-finishing Garner.

The McEvoy-trained filly by Deep Field had won once before over the course and distance and held strong form lines coming in. Xilong placed in the Group 1 Surround Stakes at Randwick back in February before running fourth behind Garner in the Listed Redelva Stakes first-up at Morphettville two weeks ago. 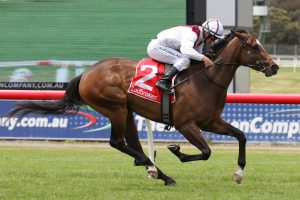 Xilong remains on the third line of betting for The Goodwood on May 16. Photo: Ultimate Racing Photos.

“I’m really pleased with her. Nothing has gone right for her this preparation, even going back to Sydney she missed out narrowly in the Group 1” co-trainer Calvin McEvoy told racing.com.

“She missed her trial going into her first-up run the other day and we knew she would’ve benefited fitness wise so much going into today, so beautiful ride by Barend, she pinged the gates and really had to do all the work, it was a really tough win.”

Saturday’s win can be credited to Vorster’s forward riding as well as the decision to race with the blinkers on for the first time.

“She worked beautifully in them at home” McEvoy said of the gear change. “She’s a funny filly, she’s very quiet at home but just gets here and knows it game day and again she was a little difficult to saddle up but if she keeps winning like that I’ll put up with it.”

The three-year-old will now head to the $400,000 Group 1 The Goodwood in a fortnight’s time as a steady $26.00 chance in Ladbrokes’ All-In market with Saturday’s second place-getter Garner remaining steady at $15.00.

Ladbrokes’ complete The Goodwood market can be viewed here.