The daughter of Savabeel was installed as a $6.50 chance with Ladbrokes despite coming off a bold first-up win in the Group 3 Bill Ritchie (1400m) a fortnight ago.

McEvoy found himself tracking out deep into the straight from the wide draw, a position that only helped his chances as the leaders fell away at the 300m to leave only Probabeel and Funstar dashing home to the finish.

The four-year-old mare was having their third run back from a spell, but simply proved no match for Proababeel’s turn of foot as McEvoy pushed the button over the final furlong to race a length clear. 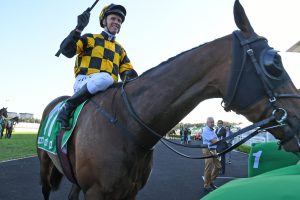 “She showed her true grit there, she really picked up well for me, and I knew that if I could just have a conservative run through the first part she was going to be really strong for me with no weight on her back and that is exactly what she was able to do” McEvoy said after his first career win in the Epsom.

“I thought straight away at the top of the lane I thought I’ve got Bossy’s measure on Funstar.”

“This is a big deal for New Zealand racing and for Jamie, a young trainer on the rise, he’s done a fabulous job” Thornton said.

We’ve had a trouble free run and she’s just a gorgeous mare to do anything with. We may look at Melbourne now but we will see how she gets through this and make some plans.”

Probabeel also made history by becoming the only horse since Boban to win go on and win the Epsom after claiming the Bill Ritchie previously.

Funstar, on the other hand, should take great improvement away as he eyes a spot in the Golden Eagle at Rosehill on October 31.

“She ran up to her best. Probabeel was just too good on the day. I straightened up and felt like and kicked like the winner” beaten jockey Glen Boss said.