Trumbull was too good for his rivals late in Saturday’s Listed $150,000 Civic Stakes (1350m), Kim Waugh’s tough four-year-old finally getting things his way in his winter grand final at Rosehill Gardens. 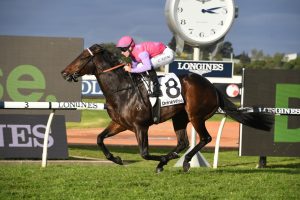 The four-year-old Darci Brahma gelding has had a luckless campaign this preparation, also developing what Waugh called the “silly habit” of mucking up in the gates and jumping away tardily.

The horse pinged the barriers in the Civic Stakes however with jockey Tommy Berry showing the horse he meant business, Trumbull responding with a quick getaway before settling beautifully in a gun spot fourth the fence.

The Godolphin-raced favourite Home Of The Brave led the field around, Trumbull travelling well just off the pace before moving up the inside on the straight.

Berry hit the front inside the final furlong before Trumbull drew clear, charging home strongly to defeat the Chris Waller-trained duo Order Again (2nd) and Dealmaker (3rd) who were coming back off runs over the mile.

“I can’t believe it, we’ve had such a frustrating run with him this whole preparation,” Waugh said post-win.

“He’s developed this silly habit. But we’ve given him a bit of barrier practice at home.

“That’s what he can do…he just learnt that silly habit (in the barriers).

“It would be a really good confidence for him today.

“He just needed luck and he really does deserve this.

“He’s had a lot of runs this prep and he just keeps backing up, he’s a tough boy.

“He’s done my head in the last six weeks, but honestly it’s a big thrill when you put so much work into them…and you finally get a result for the owners.”