Champion trainer Michael Maroney appears to have a serious colt on his hands in the form of Alabama Express.

Alabama Express came in on the back of a win at Flemington three weeks ago where he won comfortably by two lengths. Even so, the bookies overlooked Maroney’s promising young galloper despite having won three of his six starts. 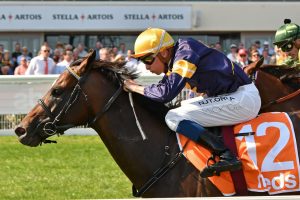 Jockey Michael Dee was in the saddle on Saturday and did a great job covering ground late from barrier 10. Alabama Express made up a wall four-wide over the final 300m before Dee kicked home strongly to win by half a length.

“All credit goes down to this tough bloke here. He did it tough three deep no cover from the wide barrier and geez he’s tough, he tries hard and that’s what he did today,” Dee told Racing.com.

The win marked Dee’s fourth Group 1 victory, while it was also a particularly special day for Maroney, who finally claimed a milestone 50th Group 1 win.

Maroney said after the race that he saw shades of Redoute’s Choice in Alabama Express and that he couldn’t be happier to claim his 50th win with such a special horse.

“The horse has come back fitter and stronger and really become professional now. He’s a lovely colt, he’s more like Dad than probably any horse I’ve seen, and he’s done what Dad did” Maroney said.

Saturday marked Alabama’s Expresses’ second run this campaign as Maroney now eyes a start in the Group 1 Newmarket Handicap (1200m) at Flemington on March 7. Not surprisingly, the bookies have acted accordingly by firming Alabama Express from $17 into $10 in the early All-In market.

Second place-getter Fierce Impact lost no admirers either flashing home late from a wide draw. Scales of Justice, who opened as the $2.80 favourite, finished sixth ahead of second-elect Hey Doc in ninth.