Verry Elleegant stamped herself as one of the best fillies in the country with an impressive win in the 2019 Vinery Stud Stakes at Rosehill Gardens on Saturday. 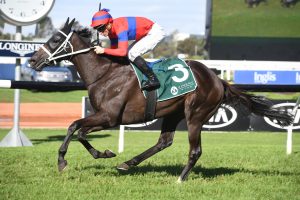 There was a huge amount of money for Verry Elleegant ahead of the Vinery Stud Stakes on the back of her dominant win in the Phar Lap Stakes and the money proved to be right on the mark.

James McDonald elected to settle Verryy Elleegant in the second half of the Vinery Stud Stakes field and Greysful Glamour ensured that the race was run at a genuine tempo.

Verry Elleegant settled much better than she had done in her previous race starts and she cruised into the race when McDonald asked her for an extra effort at the top of the straight.

Frankely Awesome made up good ground late and Arisitia didn’t go away, but Verry Elleegant proved far too slick for her rivals and cruised to a maiden Group 1 victory.

Trainer Chris Waller was delighted that the gear changes he had made to Verryy Elleegant had paid dividends and he confirmed that she will press on to the 2019 Australian Oaks at Royal Randwick in a fortnights time.

“She’s a smart filly, she just needed a little bit of working out,” Waller said.

“Having the confidence to take gear off and put extra gear on is easy when you’re training winners, but we needed to make sure we could tell the punters when you’ve got a favourite going into a Group 1 race ‘don’t worry, we’ve put the ear muffs on just to help her relax and taken the nose roll off because it wasn’t doing anything’.

“It’s worked out pretty well but obviously the horse has got talent.

“I don’t think she likes the seven-day back-up, hence the reason why she didn’t run in the Australian Guineas so I wouldn’t tempt backing her up in a week.”

“I was thinking after today if she didn’t win maybe look at Queensland Oaks, give her a bit more time.

“I don’t think we’ve got that luxury.

“We can go to the Oaks with a bit of confidence.”

Frankely Awesome clearly appreciated the step-up to 2000 metres in the Vinery Stud Stakes and she is now set to take on the boys in the Australian Derby next week.