Avilius claimed a second Group 1 win in as many weeks with a dominant victory in the 2019 Tancred Stakes at Rosehill Gardens this afternoon. 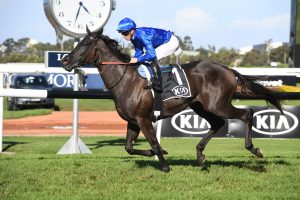 Avilius was far too strong for his rivals in the Tancred Stakes. Photo by: Steve Hart

Trainer James Cummings elected to back-up Avilius in the Tancred Stakes following his victory in the Ranvet Stakes last weekend and his effortless victory proved that was definitely the right decision.

They went extremely slow in the early stages of the Tancred Stakes and that played straight into the hands of Avilius, whose turn-of-foot was clearly superior to that of his rivals.

Cummings admitted after the race that he went into the Tancred Stakes with a great deal of confidence and he was delighted to see Avilius claim such an effortless win.

“As careful as a trainer has to be about being arrogant coming into a big race meeting, his effort today was imperious,” Cummings said.

“He’s had a $1.5million canter around Rosehill.

“Regardless of the great week he’s had I looked at the horse this morning and I just felt like he was stronger, he was better than last week and it was going to take horrible bias or some sort of tragedy to happen to pull him up.

“What he was able to do there was demonstrate the natural speed and strength that he’s got.”

Avilius has been included in the 2019 Queen Elizabeth Stakes nominations, but Cummings revealed after the Tancred Stakes that a clash with Winx at Royal Randwick in a fortnight is highly unlikely and the talented import will head to the spelling paddock.

“More than likely we knew he’d be in the paddock after this,” Cummings said.

“He still holds a nomination in the Queen Elizabeth but in my opinion I’ll put him in a paddock now.

“The preparation he’s had has been magnificent.”