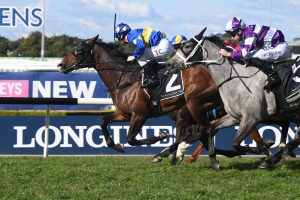 Improving from second last in the run, the son of Dawn Approach savaged the line late making up all the ground in the sprint feature at Rosehill Gardens to bring his career record up to two wins from three starts.

Dawn Passage is also in the top-half of Golden Rose futures betting firming in from $15 to $13 after his perfectly-timed The Rosebud victory over the Bjorn Baker-trained Redoute’s Choice filly Let It Pour.

“She’s still learning her craft so to be going to the line with those sets her up well into the future.”

Chris Waller saddled-up the narrow favourite in The Rosebud markets, grey I Am Invincible filly Lucicello, who was far from disgraced settling last in the fast-paced race before improving to run third.

“[It was a] massive rise in class and her performance shows she’s up to it,” Lucicello’s jockey Tommy Berry said.

“The winner just sprinted quicker than us on the day.”

The winning hoop Tim Clark was not convinced Dawn Passage would be a top-level three-year-old until the impressive The Rosebud win.

“All his racing he’s settled back a bit,” Clark said.

“I loved the way he really pinged his ears back late and savaged the line.”

Waterhouse described the win by Dawn Passage, who was wearing the blinkers for the first time, as “outstanding” despite the colt failing to settle closer in the run.

“He’s an outstanding colt,” she said.

“To do what he did today and have to make up the lengths he did.

“I thought it was an outstanding effort.

“You’ll see improvement as he gets over further.

“You’ll be seeing plenty of him.

“It’s exactly the right stepping stone for the Golden Rose.”