The 2019 Melbourne Cup field has been released and 24 of the best stayers in the world are set to contest ‘the race that stops a nation’ at Flemington on Tuesday. 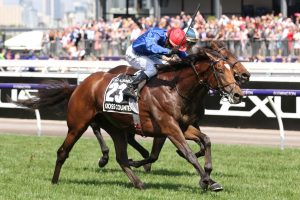 Cross Counter has the chance to become the first horse since Makyve Diva to win the Melbourne Cup in back-to-back years. Photo by: Steve Hart

Cross Counter won the Melbourne Cup 12 months ago and he is back for another crack at the Group 1 event after racing well without winning in the United Kingdom this season.

No horse has won the Melbourne Cup in back-to-back years since Makybe Diva and Cross Counter will carry 57.5 kilograms.

Another horse looking to emulate a feat that hasn’t been done for over a decade is Mer De Glace.

No horse has won the Caulfield Cup and the Melbourne Cup in the same year since Ethereal in 2001, but Japanese stayer Mer De Glace has an excellent opportunity to do just that on Tuesday.

Vow And Declare finished second behind Mer De Glace in the Caulfield Cup and he will have the chance to turn-the-tables on his rival when in the Melbourne Cup.

The Melbourne Cup has always been the major target for Vow And Declare during his Spring Racing Carnival campaign and he looks as though he will relish the step-up to 3200 metres.

Mirage Dancer rounds out the Caulfield Cup placegetters and has also been included in the 2019 Melbourne Cup field.

Constantinople had a luckless run in the Caulfield Cup and it is no surprise that he is currently on top of Melbourne Cup betting with Ladbrokes.

He is joined in the Melbourne Cup field by stablemates Rostropovich and Neufbosc.

Both Rostropovich and Neufbosc have struggled during the Spring Racing Carnival to date and there is no doubt that the stables best chance is Constantinople.

Another trainer with multiple runners in the 2019 Melbourne Cup field is Aidan O’Brien, who finished a narrow second with Johannes Vermeer back in 2017.

O’Brien will be represented in the field by the lightly-raced Il Paradiso and Moonee Valley Gold Cup winner Hunting Horn as well as Ladbrokes Cox Plate fourth placegetter Magic Wand.

Il Paradiso failed to fire in his most recent start in the St Leger, but he has still been one of the best-backed horses in Melbourne Cup betting with Ladbrokes.

Aidan O’Brien is joined in Australia by his Melbourne Cup winning son Joseph O’Brien, who will have four runners in the race.

Master Of Reality has been the best-backed of O’Brien’s runners and he is joined in the race by stablemates Latrobe, Twilight Payment and Lexus Hotham Stakes winner Downdraft.

The Chosen One failed to fire in the Lexus Hotham Stakes, but will still take his place in the Melbourne Cup field.

The past two Melbourne Cup winners have gone into the race without a lead-up run in Australia and a number of horses in this year’s field will follow that same profile.

Southern France and Raymond Tusk will both make their Australian racing debuts in the Melbourne Cup and there has been support for both with [Ladbrokes].

Other horses in the field have plenty of experience in Australia and the likes of Finche, Prince Of Arran and Youngstar will contest the race for the second year in a row.

Finche has had an ideal preparation for the Melbourne Cup and he has an excellent chance to deliver trainer Chris Waller a maiden win in ‘the race that stops a nation’, while Prince Of Arran goes into the race on the back of a tough victory in the Geelong Cup.

A Chris Waller Melbourne Cup win would be a popular result, but this year’s Melbourne Cup feel good story lies with Surprise Baby.

Surprise Baby was purchased for only $5000 as a yearling, but will now go into the Melbourne Cup as a genuine winning chance following a very impressive victory in The Bart Cummings.