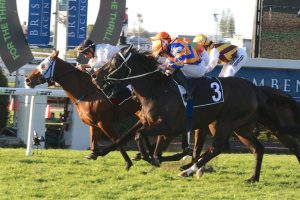 River Racer (pictured at Doomben) returned to winning form in the 2019 Galsshouse Handicap at the Sunshine Coast. Photo: Daniel Costello.

All the money in betting on the penultimate race was for Richard Laming’s mudlark, Group winner Jamaican Rain.

It was another wet-tracking mare who stole the show however, Hidden Dragon five-year-old River Racer improving on her last start eighth behind subsequent Tatt’s Tiara winner Invincibella in the Group 2 Dane Ripper Stakes (1400m) from June 8.

Her Eagle Farm-based trainer Ross was confident he had River Racer going as best he could ahead of the Cup Day feature at Caloundra, but admitted his concerns stepping the bay up over 1400m after she failed to run the distance in the Dane Ripper.

“I was worried about the 1400m but she ran so well and the soft track obviously helps.”

He needn’t have feared, River Racer given an absolute peach of a ride by the flying young Singapore-born hoop Matthew McGillvray who added another Black-Type success to his outstanding Queensland Winter Racing Carnival results.

“That was a top ride, ten out of ten,” Ross added.

“He got one off [the fence] and got a little bit further out than I would’ve like, but he done the job.

“She ran third in this race last year and I really thought she could improve this year.

Jamaican Rain led the Glasshouse field around, but was no match late for the backmarkers who swamped her on the straight including River Racer finishing strongly down the outside.

The eventual winner wound-up beautifully, really getting going over the final furlong to salute by two lengths over the Steve Tregea-trained Niccanova.

Two horses then finished in a dead-heat for third with Chapter And Verse and Platinum Angel unable to be separated in the photo.

“I just can’t believe I’ve had such a good run,” McGillivray said, speaking of his winter carnival that included his maiden Group 1 winning ride on the Queensland Oaks champ Winning Ways.

“I wanted to ride her [River Racer]. I thought she was a big chance.

“Les Ross knows how to train a wet tracker.”

There is a chance River Racer could head south for the Grafton Cup Carnival next with the Listed $160,000 Ramornie Handicap (1200m) on July 10 a potential target.