Ballot-free entry into the 2019 Caulfield Cup has been confirmed for Wolfe following his tough win in this afternoon’s Ladbrokes Coongy Cup (2000m). 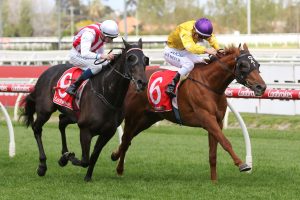 Wolfe (inside) held on to beat Top Of The Range in this afternoon’s Coongy Cup. Photo: Ultimate Racing Photos

Only two horses in this afternoon’s Group 3 race well eligible for entry into Saturday’s $5 million feature race and Wolfe did his chances of winning no harm when jumping well and crossing the field with ease to find a prominent position.

The five-year-old was met and passed by Macedon Lodge import Nelson across the back straight, but jockey Linda Meech remained calm and kept her horse in a lovely rhythm in transit.

Wolfe lifted the tempo as the field turned for home and comfortably jogged past Nelson; kicking clear of his rivals and sustaining a strong run to the line to hold off Top Of The Range, Kiwia running on well to fill the minors.

Gai Waterhouse was on hand for Wolfe’s win in the Ladbrokes Coongy Cup and confirmed that he will take his place in the 2019 Caulfield Cup field.

“It’s the old ‘win and you’re in’, and what a lovely idea it is,” Waterhouse said after the race.

“He is very lightly-weighted and now we have to find a jockey! He’s tough, he was bred in Japan and if you had to stand in that snow up to your eyeballs, you’d be tough too!

Meech delivered a gem of a ride aboard Wolfe to win the Ladbrokes Coongy Cup, but was quick to lay all the praise on the horse and the training efforts of Gai & Adrian Bott.

“He was terrific. I don’t think I’ve wanted a horse to win more than that, so it’s great,” she said.

“He had that typical Gai Waterhouse polish on him and he didn’t know when to stop.

Meech is confident that the horse could measure up in the Caulfield Cup 2019.

“I don’t see why not. With the blinkers on he’s much better, he’s much sharper and he’s more on his game,” she said.

The 2019 Caulfield Cup barrier draw will be completed at 6:30pm AEDT this evening (October 16).

Wolfe remains a $26 shot in 2019 Caulfield Cup betting at Ladbrokes.com.au.