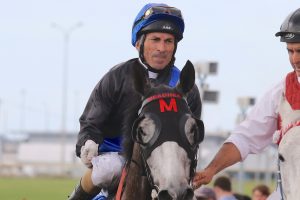 Priscott was singing his six-year-old daughter of Galileo praises this week with the Heavy (10) track at the Sunshine Coast a huge advantage.

German-bred with definite mudlark pedigree, Igraine was after atonement in the Caloundra Cup after she finished over eight lengths back 12th to Sixties Groove last start in the Group 2 $400,000 Brisbane Cup (2400m).

That Eagle Farm run on Stradbroke Day, June 8, had been her original Queensland Winter Racing Carnival target but the Good (3) track was simply too firm.

The disappointing Brisbane Cup effort followed her earlier good form since coming across the Tasman, Igraine running second to the Chris Waller-trained Le Junge when a nostril-flare off the winner in the Group 3 Chairman’s Handicap (2000m) at Doomben.

She was also in the money on May 25 behind flying Gold Coast galloper The Candy Man when 1.45 lengths away third in the Group 3 Premier’s Cup (2200m).

Back to her best in the Caloundra Cup, Igraine rewarded Priscott with a consolation feature race win and was ridden to victory by South African Robbie Fradd who was aboard the mare for the first time.

“I was on the right filly,” Fradd said after the win.

“A German-bred filly, they flourish on this ground.

“She gets through it no problem. She was doing her best work late funnily enough.

“She just travelled good the whole way. I hit a few of those patches, she never faulted, she just got through them so well.”

Four-year-old So You Think mare Sopressa, seventh in the Brisbane Cup last time out, led the Caloundra Cup field around and held for a brave second behind Igraine who raced wide down the outside to grab the lead and salute.

“He [Fradd] gave her a lovely ride and she won well.”

The well-backed favourite Big Duke was gone before things got serious, the 60.5kg top-weight struggling under the kilos finishing 4.85 lengths back sixth.

The 2019 Grafton Cup will likely be Igraine’s swansong race before she begins her new career as a broodmare.