The headline race at the Sunshine Coast this afternoon is the Listed $175,000 Kendrick Racing Caloundra Cup (2400m) where Travistee has been well-backed in betting following the three scratchings. 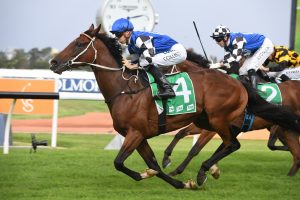 The official Caloundra Cup field is down to a dozen runners with the early withdrawal of Chris Waller’s Stayers Cup contender Mazaz (2), the Michael Nolan-trained mare Ruby Guru (9) and the Gold Coast’s Heart Of Toorak (8).

One of the best backed runners for the popular Queensland Winter Racing Carnival feature is the Paul Jenkins-trained Tavistock mare Travistee, the Kiwi-bred five-year-old locally-trained at the Sunshine Coast.

Boasting an excellent home track record (14: 5-4-2), Travistee opened as long as $18 at the Caloundra Cup odds online through Ladbrokes.com.au.

She has since been heavily supported and has firmed right into $7.50 to give the 60.5kg top weight, proven wet-tracker Big Duke ($2.60), a run for his money.

Tiffani Brooker has the ride on Travistee in the Caloundra Cup this afternoon from the outside barrier (12) and the two get in on the 54kg minimum.

Last Saturday at Eagle Farm the mare had the same hoop and weight when finishing a well-beaten ninth in the $200,000 Group 3 Tattersall’s Cup (3000m).

Big Duke, who is out to set a new weight-carrying record in the Caloundra Cup today, also ran in the Tattersall’s Cup when second behind the gun young winner Vow And Declare.

Travistee failed to extend to the 3000m and so will relish dropping back to a mile and a half in the Caloundra Cup and should also benefit from the Heavy-rated track.

She has had three runs on Heavy going for a win and two seconds to date, the latest seeing her run a brave second behind the ultra-consistent The Candy Man at the Gold Coast over 1800m on May 18.

The Caloundra Cup will be the bay’s third run in as many Saturdays with Jenkins looking to strike while she is in form.

Te Awamutu horseman Robert Priscott saddles-up Galileo six-year-old Igraine who is out to atone for her 12th in the Group 2 Brisbane Cup (2400m) from June 8.

Prior to that she was in flying form when runner-up at Doomben in the Group 3 Chairman’s Handicap (2000m) and third behind The Candy Man in the Group 3 Premier’s Cup (2200m) at Eagle Farm.

German-bred, Igraine has excellent Soft – Heavy track form and showed she was spot-on for the Caloundra Cup with an outstanding track gallop earlier in the week.

Further boosting her chances is the outstanding recent record of Kiwi raiders in the Caloundra Cup with 10 wins since 1985, the latest being Nigel Tiley’s Megablast (2018) last winter.

Saunter Boy meanwhile is a Jeff Lloyd mount, the French-bred son of Myboycharlie third-up down under.

He ran fourth in the same The Candy Man-won event Travistee finished second in on debut in Australia before his 1.3 length fifth in the Listed Winter Cup (2400m) at Rosehill on June 15.

The Caloundra Cup runs as the Sunshine Coast Race 7 at 4:33pm (AEST).