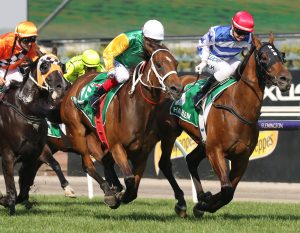 A peach of a ride from Jamie Kah helped Harlem win the Australian Cup for the second year in a row at Flemington this afternoon.

Harlem had no won a race since he took out the Australian Cup at big odds 12 months ago and once again went into the race at a juicy price.

Avilius started the Australian Cup at short odds and looked set to cruise to victory when he popped out at the 200 metre mark, but he offered nothing in the concluding stages and it came down to a battle between Shillelagh and Harlem.

Shillelagh looked set to claim another Group 1 victory, but Harlem was able to fight back in the concluding stages to claim a memorable win.

Kah made the move from Adelaide to Melbourne in order to chase more rides at the highest level of racing and she was clearly delighted that decision had paid off with an Australian Cup win.

“I came over here for these opportunities and I didn’t expect it this soon.

“I wanted to be on the rail and he travelled amazing.

“On the turn he was cruising almost too well and I wanted to wait a little bit longer on him.

“He hit the front and he felt the other horse, so I knew that he would be in for the fight.

“It has been a tough few first months, but I’ve been working hard and trying to do as much track work as I can.

“It is just unbelievable.”

Co-trainer David Hayes was quick to praise Kah for an outstanding ride and he did not seem particularly surprised that Harlem had been able to win the Australian Cup at big  odds once again.

“He is a real target horse and he goes well over 2000 metres at Flemington,” Hayes said.

“It was a great ride from Jamie.

“It was a huge thrill and I like the fight he showed.

“Those good horses on good days step-up and you just have to get them in form and get luck in running.

“He will go to Sydney and hopefully avoid Winx.”