The 2017 Golden Rose Stakes Day results will be updated all afternoon at horseracing.com.au and the Group 1 event is set to be one of the highlights of the 2017 Sydney Spring Racing Carnival. 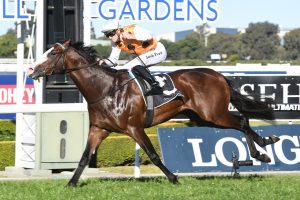 Menari will start the 2017 Golden Rose Stakes as a clear favourite with Ladbrokes. Photo by: Steve Hart

Menari was nothing short of outstanding in both The Rosebud and The Run To The Rose and he will go into the Golden Rose Stakes as a clear favourite in the betting market with Ladbrokes, but this is a field that is packed full of quality and he won’t have things his own way.

The Colin Stephen Quality, Shannon Stakes and Gloaming Stakes are the other black-type races on this card and they will be key form references for The Metropolitan, Epsom Handicap and Spring Champion Stakes respectively.

Beau Geste returned to winning form with a professional win in the opener at Rosehill Gardens on Golden Rose Stakes Day.

Hugh Bowman on Paret got onto the back of Beau Geste in the straight and he looked as though he would finish over the top of his rival, but he raced erratically in the final stages.

Beau Geste was more focused on the job at hand and he found the line nicely to return to winning form after being beaten as a favourite first-up.

Auvray fought out the finish of the Colin Stephen Quality with Admiral Jello and Broadside. Photo by: Steve Hart

Auvray fought-off Admiral Jello and Broadside to win a thrilling edition of the 2017 Colin Stephen Quality at Rosehill Gardens this afternoon.

There were only five horses in the Colin Stephen Quality and there was nothing between three of them as Auvray, Admiral Jello and Broadside all were genuine winning chances in the final 200 metres.

Auvray was eventually able to tough it out to claim victory and he will now back-up in the Group 1 The Metropolitan (2400m) at Royal Randwick next weekend.

Don’t Give A Damn was nothing short of dominant in the Highway Handicap. Photo by: Steve Hart

Don’t Give A Damn proved far too strong for his rivals in the Highway Handicap at Rosehill Gardens this afternoon.

Don’t Give A Damn was backed as though unbeatable in the Highway Handicap and that proved to be the case as he bolted clear from his rivals when asked for an extra effort to win by six lengths.

The four-year-old gelding will be tough to beat in the $200,000 Anniversary Highway Handicap at Royal Randwick on The Everest Day and looks as though he will be up to genuine city class.

Alward upstaged stablemate Up ‘N’ Rolling to win the Ranvet Handicap at Rosehill Gardens this afternoon.

It was Up ‘N’ Rolling that was well-backed to take out the Ranvet Handicap, but Hugh Bowman on Alward outrode Kerrin McEvoy on Up ‘N’ Rolling and that proved to be the difference.

Bowman kept Up ‘N’ Rolling in a pocket for as long as possible and didn’t let him out until Alward had already opened up a winning lead.

Washington Heights was too good for his rivals in the 2017 Shannon Stakes. Photo by: Steve Hart

Washington Heights continued his stellar return to Australian racing to take out the 2017 Shannon Stakes at Rosehill Gardens this afternoon.

Kerrin McEvoy settled Washington Heights at the tail of the field in the early stages of the Shannon Stakes and he tracked into the race nicely.

Washington Heights responded extremely well when asked for an extra effort from McEvoy and he bolted home in the final stages to record his third win from his past four starts.

Ace High toughed it out to win the 2017 Gloaming Stakes. Photo by: Steve Hart

Ace High led from start to finish to take out the 2017 Gloaming Stakes at Rosehill Gardens this afternoon.

Tye Angland took Ace High straight to the front in the early stages of the Gloaming Stakes and he did not have things his own way in front.

Sanctioned cruised home to Ace High at the top of the straight and looked as though he would be far too strong for his rival, but he was unable to get past a very tough Ace High.

Trapeze Artist could hardly have been more impressive in the 2017 Golden Rose Stakes. Photo by: Steve Hart

Trapeze Artist produced a stellar performance to record a stunning upset win in the 2017 Golden Rose Stakes at Rosehill Gardens this afternoon.

Gerald Ryan was expected to win the Golden Rose with Menari, but Trapeze Artist always travelled better than his stablemate and unleashed a stunning turn-of-foot when asked for an extra effort.

Trapeze Artist hit the front at the 150 metre mark and he absolutely savaged the line to put a serious gap on his rivals in the final stages of the race.

Andrew Adkins was caught wide in the early stages of the Golden Pendant, but it did not take away her turn-of-foot and she finished over the top of Sweet Redemption down the outside.

Dixie Blossoms came at her stablemate late, but Daysee Doom was too strong and she held-on to claim an important winner for trainer Ron Quinton.

Sir Plush led from start to finish to win the final race at Rosehill Gardens on Golden Rose Stakes Day.

Jason Collett took up the running on Sir Plush and he ensured that the race was run at a very genuine tempo.

Sir Plush kicked away at the top of the straight and never looked like being caught in the final stages of the race.