The 2017 Caulfield Cup Form Guide is essential reading in the lead-up to the Group 1 event that will be held at Caulfield tomorrow. 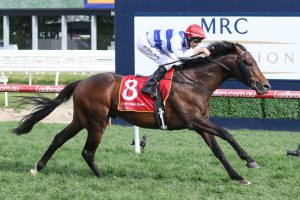 Harlem is one of a number of contenders in the 2017 Caulfield Cup. Photo by: Ultimate Racing Photos

Don’t have time to do the form yourself – you can find everything that you need to know in our complete Caulfield Cup Form Guide!

Humidor started his 2017 Spring Racing Carnival campaign with credible efforts in the P.B. Lawrence Stakes and the Memsie Stakes before he exploded to take out the Group 1 Makybe Diva Stakes in extremely impressive fashion. That stamped him as a Caulfield Cup favourite, but he has been a drifter in the betting market with Ladbrokes since he finished third behind Winx and Ventura Storm in the Turnbull Stakes. On his best form he is a leading contender, but Caulfield is a concern.

Marmelo started the European racing season with a win in the Prix De Barbeville in France. He was unplaced in the Yorkshire Cup in England, but he returned to his best form with a second place finish in the Prix Maruice De Nieuil and he won the Prix Kergorlay at Deauville – a race that has been a very strong reference for the Melbourne Cup. He has a similar profile to some of the other European horses that have won the Caulfield Cup in the past and he is right in this race at a juicy price.

Johannes Vermeer raced a touch flat in the Tattersalls Gold Cup at Curragh and the Prince Of Wales’s Stakes at Royal Ascot before he returned to winning form in the International Stakes at Curragh. He was beaten as an odds-on favourite in the Ballyroan Stakes, but he made his Australian racing debut with a fast-finishing second in the Ladbrokes Stakes. That performance saw him backed into Caulfield Cup favourite and the money has continued. There really is no knock on this horse and he will be tough to beat.

Australian Derby winner Jon Snow started his 2017 Spring Racing Carnival campaign with a sixth place finish in the Memsie Stakes and he was never able to get into the race in the Makybe Diva Stakes. The drop back-in class helped and he won the JRA Cup before he finished a tough third in the Ladbrokes Stakes. He will make his own luck right on the speed and isn’t out of this race.

He’s Our Rokkii started his campaign with a nice effort in the P.B. Lawrence Stakes, but he has been very poor since in the Dato’ Tan Chin Nam Stakes, Underwood Stakes and Craven Plate. It is impossible to back him in a race like the Caulfield Cup off his recent form.

Sir Isaac Newton was found to have an elevated heart rate when he was beaten by 35 lengths in the Dato’ Tan Chin Nam Stakes and he improved to finish a credible six in the Naturalism Stakes before he was no match for Winx in the Turnbull Stakes. He will take up the running and could give a sight, but it is tough to see him winning.

Ventura Storm has improved each time that he has been seen at the races this preparation. He returned to the races with a seventh place finish in the Heatherlie Stakes and he finished sixth in the Makybe Diva Stakes before he stamped himself as a genuine Caulfield Cup contender with a second place finish behind Winx in the Turnbull Stakes. He is well and truly over the odds at $12.

There is no fitter horse in the 2017 Caulfield Cup field than Wicklow Brave. He won the Champion Hurdle in Punchestown back in April and he has since had five race starts on the flat. The veteran wasn’t able to record a race win, but he was placed in the Curragh Cup and finished fourth in the Goodwood Cup, Irish St Leger Trial and Irish St Leger. Willie Mullins has an excellent record when ge brings horses to Australia and Wicklow Brave for run better than his odds suggest. A must for exotics.

Inference is another horse that has been heading in the right direction this preparation. He couldn’t keep up in the Warwick Stakes or the Makybe Diva Stakes, but he did run some nice closing sectionals in the Underwood Stakes and the Ladbrokes Stakes. He has been given a traditional Caulfield Cup preparation and he has been spruiked by a number of racing experts.

Single Gaze did not have a great deal of time in the paddock following her excellent Brisbane Winter Racing Carnival campaign and she failed to fire first-up in the Memsie Stakes. She produced a much improved effort in the Makybe Diva Stakes and she was extremely tough in both the Underwood Stakes and the Ladbrokes Stakes. She will not be disgraced, but it would surprise to see her win.

There has been plenty of speculation over the fitness of Australian Oaks winner Bonneval, but she has been passed fit to contest the Caulfield Cup. She went straight to the top of Caulfield Cup betting with her excellent wins in the Dato’ Tan Chin Nam Stakes and the Underwood Stakes, but she has been on the drift significantly following her flat sixth place effort in the Ladbrokes Stakes. You can never rule out Murray Baker and Bonneval would be right in this race on her best form.

This is the first time that Hardham will return to Group 1 level since he finished a flashing third behind Jon Snow and Harper’s Choice in the Australian Derby. He won the Sofitel Girls’ Day Out Handicap, but he was beaten as an odds-on favourite in the Inglis Cup. That is not the sort of form you want heading into a Caulfield Cup, but he was excellent in the Australian Derby in the Autumn and he is another that could sneak his way into the placings at a big price.

Boom Time is another horse that has not won this preparation, but he was placed in the Ladbrokes Handicap and the JRA Cup before he finished fourth in the Ladbrokes Herbert Power Stakes. He is just below the level that is required to really be competitive in a race like the Caulfield Cup.

Abbey Marie started her 2017 Spring Racing Carnival campaign with a seventh place finish in the P.B. Lawrence Stakes and she looked to be heading in the right direction with a second place finish in the Dato’ Tan Chin Nam Stakes. She proceeded to race flat in the Naturalism Stakes and was never able to get into the race in the Ladbrokes Stakes. It is tough to back her off those efforts.

Harlem found the line strongly to finish fifth in the Heatherlie Stakes first-up and he produced the best performance of his career to date to secure his place in the Caulfield Cup with a win in the Naturalism Stakes. He was unable to replicate that level of performance in The Bart Cummings and he would need to produce at that level again to be any chance in the Caulfield Cup.

Amelie’s Star is another horse that heads into the Caulfield Cup with plenty of miles in her legs. She was never able to get into the race in the P.B. Lawrence Stakes before she found the line nicely to finish third in the Heatherlie Stakes. Plenty of punters dropped off her after her poor effort in the Sofitel Girls’ Day Out Handicap, but she ran the best closing splits in the Naturalism Stakes before she secured a place in the Melbourne Cup with a victory in The Bart Cummings. She is a talented mare with an excellent record over 2400 metres, but she might be a touch under the odds at her current price.

Lord Fandango is a progressive import that may be one of the most interesting runners in the 2017 Caulfield Cup field. He started his campaign with a second place finish at Bendigo before he relished the step-up in trip to win the Benalla Cup. There was a bit of money for him heading into the Ladbrokes Herbert Power Stakes at Caulfield last weekend and he justified that support to record a strong staying win. This race might have come around a bit too soon for him, but he does have a massive amount of upside.