Jockey Mark Zahra will be the new rider on brilliant Sydney two year old Rulership when he makes his Melbourne debut in the Group 3 $200,000 Neds Blue Diamond Prelude (C&G) (1100m) at Caulfield on February 8. 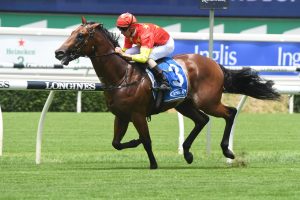 Rulership, above, will head to Melbourne for the 2020 Group 1 Blue Diamond Stakes at Caulfield. Photo by Steve Hart.

Sydney based jockey Nash Rawilier rode Rulership when a very impressive winner in his first race day appearance with an all the way two and a quarter lengths thrashing of his rivals in a 1000m two year old Handicap at Randwick last Saturday.

The Peter and Paul Snowden trained juvenile is now well in contention for the 2020 Group 1 $1.5m Ned Blue Diamond Stakes (1200m) at Caulfield on February 22 and is the second pick at $7 behind the Ladbrokes.com.au $3.60 favourite Hanseatic.

Rawiller was sad to lose the ride on Rulership but expects other opportunities to emerge during the 2020 Autumn Racing Carnival.

“I can tell you, I was booking my plane tickets (to Melbourne to ride Rulership), but I’ve been overlooked. But that’s all right, you never know what can happen down the track,” Rawiller said on RSN927.

“I haven’t ridden a two-year-old colt with as good an attitude as what he’s got in a long time. He’s just a perfect racehorse.”

“He is not a huge horse, but he is very well put together and very athletic. His attitude and the motor he has got will take him a long way.”

Co-trainer Paul Snowden has similar views about Rulership as Rawiller and rates the I Am Invincible colt very highly among the stables juveniles.

“I think we will be guided by his next run to see where he sits among them,” Snowden said.

“Potentially, he has always been one of the top five or six colts in the stable.

“He jumps, travels, sits off. He has a turn of foot and he’s only going to get better when he gets up to six and seven furlongs later on.”

The Anthony Freedman trained Hanseactic shot to the top of the Blue Diamond Stakes betting when he made it two wins from two starts with a come from behind victory in the Listed $160,000 Neds Blue Diamond Preview (C&G) (1000m) at Caulfield last Saturday.