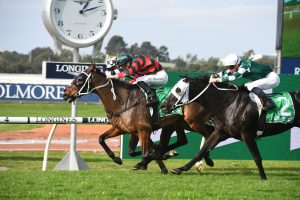 Wu Gok beat home stablemates Yulong Prince and The Lord Mayor in the Listed Lord Mayor’s Cup (2000m) on May 30 and returned on Saturday relishing another Heavy Rosehill track to take out the Listed $150,000 Winter Cup (2400m) over the mile and a half.

The six-year-old son of Sebring was on the drift in betting, but was given a soft ride up front running three-quarter pace until the 800m with Adam Hyeronimus continuing his association aboard the stayer.

Once on the straight the challenges came including from Carzoff who was charging up along the rails and Yulong Prince who jockey James McDonald had given a nice ride throughout tucked up on the fence.

Just when he looked gone however, Wu Gok ($3.80F) came back and just kept fighting all the way to the line, narrowly defeating Carzoff ($5.50) and a somewhat disappointing Yulong Prince ($4.80).

“We’ll just send him back to the farm now…there is a race over 2000m in two weeks or we might even just freshen him up and get him ready for a Metrop.”

All-in The Metropolitan betting odds at Ladbrokes.com.au have firmed on Wu Gok following the Winter Cup results in from $41 to $31.