Globe trotting jockey Craig Williams added another Group 1 win to his record when he scored on outsider Master Of Design in the Group 1 $1m Darley T J Smith (1200m) at Randwick today. 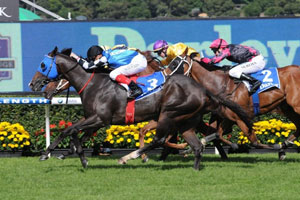 Williams bought Master Of Design from last in the six horse field to nail speedster Rain Affair in the final few strides with the Gai Waterhouse trained Hallowell Belle close up in third place.

With this Group one win beside his name the well bred Master Of Design, who was sold as a yearling for just over $2m, will be aimed to be a future successful stallion.

Winning trainer David Payne said that he left the riding instructions up to Williams and was glad he was able to get the six year old home after a long list of injuries had limited his racetrack appearances.

“We’ve been trying to win this group one, he’s so well bred, and we’ve knocked off the big guns today, which is good,” Payne said.

“He’s been a problem horse but he has got so much ability and he has delivered today.”

“We should have won the Oakleigh Plate , but it was his day today.”

Williams was happy he could repay connections with a good ride today after being held up for clear run in the straight when an unlucky ninth in the Group 1 $400,000 Sportingbet Oakleigh Plate (1100m) at Caulfield on February 25.

“I had to be confident today because I owed the connections. I was looking for more luck today than when I rode him in the sprint race in Melbourne,” Williams said.

Rain Affair ($2.70) ran his usual tough race, going under in a close photo to Master Of Design ($31) after over racing in the first three hundred metres while the disappointment of the race was the $2.10 favourite Foxwedge who seemed to have a good run during the race but failed to fight out the finish.