Craig Williams will be the new jockey aboard Atomic Force when the Group 1 winner steps out for the first time this Spring Carnival at Moonee Valley on Saturday. 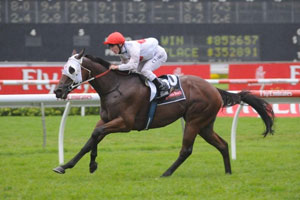 Newcastle trainer Darren Smith took Atomic Force to Moonee Valley this morning to reacquaint the seven year old with the tricky circuit and was satisfied with the 800m workout which saw the Galaxy winner run home the final 400m in 24.79ss.

“We went over and had a look at the Valley this morning, just to give him another look and a bit of a blowout,” Smith said.

“He worked over half-a-mile and worked strong to the line, so all’s good. He’s definitely going to run.”

Smith hasn’t cemented a plan for the rest of the Spring for Atomic Force and is happy to get through Saturday’s assignment before committing to a set program.

“He’s probably 80 percent. He’s still got improvement in him because he has had a long break. In saying all that, he’s pretty forward and I think he’ll run very well.

“We’re just taking it race by race with him at this stage. We’ll let him see how he comes through it all and go from there.”

Atomic Force, the winner of eleven from thirty-one starts, hasn’t raced since the Telegragh but Smith gave the Danehill Dancer gelding two barrier trials in Sydney before heading to Melbourne, the latest saw him winning his 830m Randwick hit out.

Even though Mornington trained Bel Sprinter has been ruled out of Saturday’s Printhouse Carlyon Stakes with a hoof injury, the Listed sprint has attracted a smart field including first up winner African Pulse, and Group 1 winner Green Birdie who is starting to regain some form with three runs back from a lengthy spell.