Gai Waterhouse is attracting plenty of attention as she spends up big at the Magic Millions sales at the Gold Coast this week and that could continue on to the racetrack on Saturday when she saddles up a solid team. 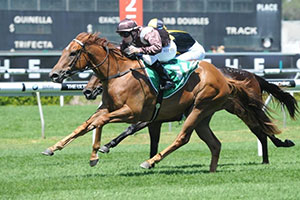 While Sweet Idea ($19) and Certitude ($21) are not among the top elects for the juvenile feature, they both bring form into the race that suggests they are winning chances.

The pair will be out to emulate stablemates Driefontein and No Looking Back who took the quinella last year and return to line up in the Magic Millions Guineas this time around.

Sweet Idea is coming off a strong second behind Missy Longstocking in the BJ McLachlan Stakes while Certitude backed up a five-length debut win at Rosehill in November with a solid fourth in the Wyong Magic Millions last month.

Stable foreman Mark Newnham put the pair through their paces in Brisbane this morning and Waterhouse said they are “spot on” ahead of the lucrative juvenile event.

“Sweet Idea and Certitude glided around the course together and both look spot on for the big race on Saturday,” Waterhouse said in her blog.

They were joined in trackwork by No Looking Back as well as Fast Clip who is equal favourite at $6 to win the Magic Millions Cup (1400m).

“Mark said the mature gelding Fast Clip, who will be wearing blinkers for the first time, found the line well,” Waterhouse said.

In her first race since the Golden Slipper, No Looking Back made an outstanding return to the track on New Year’s Day when winning the Listed Carrington Stakes and is a $5.50 chance in the Magic Millions Guineas market with Driefontein the favourite at $4.20.

Waterhouse’s other runner at the Gold Coast on Saturday is Kinnersley who is a clear favourite at $3.10 to win the Magic Millions Stayers Cup (1800m).