Waterhouse Hopes for Swift Victory in Magic Millions 2YO Classic 2021 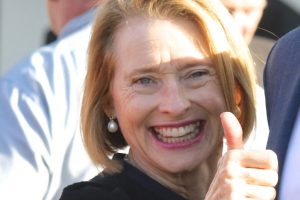 A capacity field of two-year-olds do battle in the lucrative Restricted Listed feature on Magic Millions Day this weekend including the Waterhouse & Adrian Bott-trained daughter of Star Witness.

At a current quote of $4 in the Magic Millions 2YO Classic odds at Ladbrokes.com.au, Swift Witness presents fit on the quick back-up after her breakthrough win at the Gold Coast track last Saturday.

After a debut third in the Wyong Magic Millions 2YO Classic (1100m) from mid-December, she improved when defeating a field of fellow two-year-old fillies by three lengths last weekend.

That big winning margin was despite her being awkward out and she is tipped to repeat the feat with back-to-back Gold Coast victories in her tougher assignment on Saturday with jockey Brenton Avdulla coming aboard for the ride.

The danger occupying the second line of betting is Chris Waller’s Wyong Magic Millions Classic winning filly She’s All Class ($4.40) who drew wide out in gate 18.

It was not a great draw for the talented and improving daughter of I Am Invincible who has James McDonald in the saddle again, the duo out to repeat the nearly five length Wyong win from December 16.

Waller is after his maiden Magic Millions 2YO Classic victory and also saddles-up the rails-drawn Group 3 Breeders’ Plate winner Shaquero ($11) to be ridden by Hugh Bowman as well as his Fastnet Rock colt Ranch Hand ($10) who has gained a start as the first emergency after the scratching of Fake Love (20).

The Ciaron Maher & David Eustace-trained I Am Invincible filly Fake Love was drawn out in the carpark (20) and was scratched on the eve of the race due to soreness in her left front leg.

“It is with great disappointment that we announce that Fake Love has been scratched from the 2021 Magic Millions 2YO Classic tomorrow, due to still being sore on her near fore this morning,” a stable statement confirmed.

“While this is frustrating for all concerned, the wellbeing of the horse is our priority and we look forward to getting her sound, with lofty targets ahead for the second half of the season.”

Magic Millions Classic winning trainer with Houtzen from 2017, Toby Edmonds prepares the only other current single-figure fancy in the markets with Alpine Edge ($8) drawn well in gate nine.

The undefeated son of Better Than Ready has proved a summer sensation for the stable winning back-to-back Black-Type races in Brisbane.

The classy colt debuted at Eagle Farm on December 12 with a narrow win in the Listed Phelan Ready Stakes (1000m) before returning to the track on Boxing Day for a half-length success in the Group 3 B.J. McLachlan Stakes (1200m) ahead of his trip to the Gold Coast.

The 2021 Magic Millions 2YO Classic is set to run as the Gold Coast Race 6 at 3:15pm (local AEST) on Saturday’s nine-race Magic Millions Day program.