‘Racing’s First Lady’ Gai Waterhouse may have 144 Group 1 wins on her record but she chases an elusive victory in Saturday’s $2 million Australian Derby (2400m) with eleventh hour inclusion Yaletown. 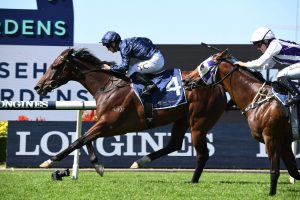 Day 1 of ‘The Championships’ features four elite level races at Royal Randwick including 16 of the season’s top three-year-old staying types doing battle in the Group 1 Australian Derby over the mile and a half.

Yaletown won his way into the Australian Derby field via success in last Saturday’s Group 2 Tulloch Stakes (2000m) at Rosehill.

Current Australian Derby markets at Ladbrokes.com.au currently list Yaletown as a $17 chance to do so, and Waterhouse is hopeful the horse can race better than his price suggests.

“He has pulled up a treat, he looks a picture,” she told Racenet this week.

The talented daughter of Kermadec is the sole filly taking on the boys in this year’s event and is after her first win since beating them home at the track in last year’s Group 1 Spring Champion Stakes (2000m).

That win over subsequent Randwick Guineas winner Lion’s Roar followed on from her Group 1 Flight Stakes (1600m) victory and was followed by her credible third at Flemington as the beaten odds-on favourite in the Group 1 VRC Oaks (2500m).

Montefilia jumps from barrier four on the weekend and presents fit third-up looking to improve on her last start third behind Mo’unga in the Group 1 Rosehill Guineas (2000m) a fortnight back.

The other top fancy at current Australian Derby odds of $4.80 to handle the likely Heavy-rated track is the eye-catching Rosehill Guineas runner-up Sky Lab for Newcastle’s Paul Perry.

Randwick Guineas champion Lion’s Roar is also well-supported in the markets on the move in from $11 to $8 to atone for his Rosehill Guineas fourth, the John O’Shea-trained Contributer gelding drawn out in gate 13 with Brenton Avdulla continuing associations.

The 2021 Bentley Australian Derby is scheduled to run as Randwick Race 7 at 3:15pm (AEST) on Saturday’s bumper 10-race program.