Premiership winners trainer Peter Moody and jockey Luke Nolen were the recipients of the major Victorian Thoroughbred Awards along with Australia’s number one racehorse Black Caviar. 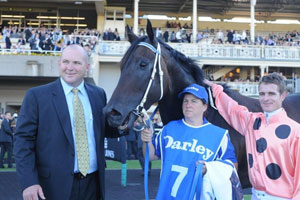 Peter Moody, Black Caviar and Luke Nolen have taken out the major awards at the Victorian Thoroughbred Awards. Photo by: Steve Hart

Moody who secured his third Melbourne trainer’s premiership, was awarded his second Fred Hoysted Medal after winning the award last year which recognises the most outstanding trainer of the season on Victorian tracks.

And Nolen also took out his second Scobie Breasley Medal, while Black Caviar made it back to back Staging Connections Victorian Racehorse of the Year.

Black Caviar, unbeaten from twenty-two starts, was the clear cut winner for the Victorian Racehorse of the Year award after polling 156 votes, a clear winner over Atlantic Jewel, also undefeated from seven starts.

The award only takes into account wins in Victoria and Black Caviar also took out the TVN Most Memorable Moment with her win in the Lightning Handicap when Moody brought the mighty mare back from 1400m to 1000m and she was able to show her superiority and drew away from arch rival Hay List to score by one and three quarter lengths.

Nolen was crowned the Scobie Breasley Medal winner for the second year in a row out voting Dwayne Dunn by fifteen votes with sixty-six.

Nolen also secured his third Victorian Metropolitan jockey’s premiership and joined Damien Oliver, Craig Williams and Brett Prebble as the only jockeys to win the award on more than one occasion.

“I don’t know if I belong in that company, they’re world-class riders all three of them, but it must mean that I’m doing something right,” said.

“This is very satisfying. I thought I had a better year last year, obviously you need the votes from the stewards and you just hope to get the recognition from them and I was pleased to get it again this year.”

“I didn’t go into the season any different to last year, I was hopeful but not confident, and fortunately it was the same result again.”

The award is named after Fred Hoysted who won 17 Victorian Trainers’ Premierships between 1933 and 1958 and Moody joined three-time winner Bart Cummings and dual champion Lee Freedman as the only trainers to win the Medal on multiple occasions.

“It’s been an unbelievable year for the stable, we’ve had tremendous success,” Moody said.

“It’s the first time we’ve won the national premiership and we’ve topped the prizemoney and Group 1 lists so it’s been an unbelievable ride.”

“It’s not a one man band, I’ve got a wonderful support base of staff and owners beside me and it’s great when it comes together and gels like this.”

Moody’s success during the Melbourne Festive Of Racing, in the February-March period, included the wins of German import Manighar in the Group 3 $125,000 Catanach’s Jewellers Carlyon Cup (1600m) at Caulfield on February 11 and Group 1 $1m Dubai Australian Cup (2000m) at Flemington on March 10.

And Black Caviar’s deeds were also in the forefront with her two Group 1 wins in this period in the $400,000 Sportingbet C.F. Orr Stakes (1400m) at Caulfield on February 11 and a memorable victory in the $750,000 Coolmore Lightning Stakes at Flemington a week later.