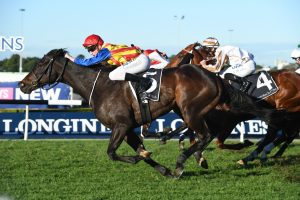 Top Striker is a roughie hope to win the Grafton Cup 2019 this Thursday. Photo: Steve Hart.

The seven-year-old son of High Chaparral has been a consistent if not somewhat frustrating performer for Hickman’s Warwick Farm-based stable this campaign.

Wednesday sees the galloper head to the races for the 42nd time and Top Striker is chasing back-to-back wins.

Last start on June 29 he relished a Heavy (9) Rosehill track to enjoy a boilover in a Benchmark 94 winning the 1100m sprint as a $51 outsider by a quarter-length.

Top Striker is again at double-figures in Ramornie Handicap betting at Ladbrokes.com.au this week currently installed at a more conservative $10.

Markets are led by the returning Matthew Dunn-trained Care To Think (59kg) at $3.90, while Top Striker gets in at the opposite end of the weight scale with the 54kg minimum.

Hoop Ben Looker has his first ride on the Sydney sprinter who the bookies have rated an Each Way chance to take out the Clarence River Jockey Club feature.

Top Striker has rarely been given the chance in stakes company due to his at time ill racecourse manners.

The horse’s last Black-Type assignment produced a ninth to Dothraki in the Group 3 Maurice McCarten Stakes (1100m) at Rosehill in March last year when only 3.3 lengths beaten.

Hickman has renewed confidence however after Top Striker’s outstanding lead-up win and subsequent form at home.

“It was super win,” Hickman told Racenet this week.

“The tempo was on and I was quite happy for him to run home and finish second, third, four or fifth.

“I wasn’t expecting him to do what he did.

“I knew he could do that but he was been a handful to train over the years.

Hickman chases his maiden Ramornie Handicap success having been represented previously by Sportsman (10th in 2004) who had a luckless run behind Takeover Target over a decade ago.

“It’s been in the back of my mind for a while,” Hickman said of the Ramornie.

“It is a great country race and is probably where the horse is at at the moment.

“He will have to be on mettle to win it because it’s a good race and always has been.

“We’ve got a good barrier and it won’t be a rock-hard track, although it won’t be as wet as it was (at Rosehill) the other day.

The 2019 Ramornie Handicap is scheduled as Race 7 at Grafton on Wednesday, due to jump at 4:00pm (local time).