Joe Pride’s evergreen veteran Destiny’s Kiss finished on top of a class field of stayers in the Listed $150,000 Winter Cup (2400m) in a gutsy performance from the rising 11-year-old who won the same race an incredible six years ago. 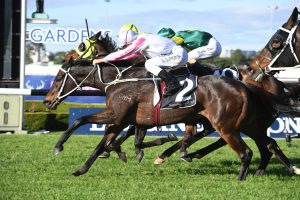 Showing he still had that zest for racing, the great old Power Of Destiny gelding went around in the Winter Cup at Rosehill Gardens as a $26 chance not having won since last winter’s Listed W.J. McKell Cup (2400m).

That was the same race he came out of this season when finishing a midfield sixth behind the Gai Waterhouse & Adrian Bott-trained import Hush Writer in his Australian race debut.

Hush Writer was favourite in Winter Cup betting to back-up with another turf triumph but it was an upset result for the punters.

Pride was far from upset with the Winter Cup result however, the Sydney horseman absolutely thrilled to see Destiny’s Kiss back on top.

“That was amazing,” Pride said.

“To get him here as a 10-year-old and win this race today, it’s very, very special.”

Sam Clipperton rode Destiny’s Kiss to victory in the Winter Cup and had the horse settled in a much more forward position tracking fifth in the 10 horse field that was led around by the Kiwi Our Big Mike.

In a surprising midrace move Tommy Berry took off on the Chris Waller-trained Casterton who took up the lead trying to steady the speed, while the race favourite Hush Writer stalked the front runners in third.

The WJ McKell Cup winner came for them around the turn hitting the front at the top of the straight.

The challengers came in the final 100m and turned it into a thrilling photo-finish between the brave top-weight Yogi who looked in no position to win on the straight and the game old Destiny’s Kiss.

In the end Destiny’s Kiss got the win over Yogi, who dove to the line, while Waller’s 53kg lightweight Mazaz ran a terrific race for third to round out the trifecta.

“He was gone 600 (metres) out, absolutely gone,” Pride said of Destiny’s Kiss after the win.

“Just the way he finds something under pressure.

“This was a good field today…big, strong imported horses and this little Aussie battler.”

So confident was Pride in the horse he declared Destiny’s Kiss to “be here for sure” to defend his Winter Cup title again in 2020.