Vega Magic is now into The Everest odds of $4.40 with Ladbrokes and he is set to start the $10 million race at Royal Randwick this afternoon as clear favourites. 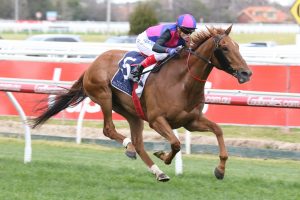 Vega Magic will start The Everest as a clear favourite. Photo by: Ultimate Racing Photos

It was She Will Reign that was on top of The Everest betting when the final field was confirmed earlier in the week and Vega Magic was available at odds as long as $6, but there has been a consistent move for the Lope de Vega gelding.

Vega Magic started his racing career under the care of Sean Casey in Perth and he won 12 of his first 17 race starts before he was transferred to the Lindsay Park team following his win in the Scahill Stakes at Ascot on December 10 last year.

He won Group 1 The Goodwood (1200m) in his first race start for the Lindsay Park team and he stamped himself as a leading contender for The Everest with his wins in the Listed Regal Roller Stakes (1200m) at Caulfield on August 19 and the Group 1 Memsie Stakes (1400m) at Caulfield on September 2.

She Will Reign has been the big drifter in The Everest betting market with Ladbrokes and she is now out to The Everest odds of $6 after being available at a quote of $4.60 earlier in the week.

The Manhattan Rain filly has suffered just the one defeat in her six race starts, which includes a win in the Golden Slipper, and she took on the older horses for the first time when she won the Group 1 Moir Stakes (1000m) at The Valley on September 29.

She Will Reign has been leapfrogged in The Everest betting with Ladbrokes by the popular grey Chautauqua, who is now into $5.50 to record another famous win over 1200 metres at Royal Randwick.

Chautauqua missed the placings in both The Shorts and the Premiere Stakes so far this preparation, but The Everest has always been his major target and his record over the 1200 metres course at Royal Randwick is nothing short of outstanding.

The only other horses that are available at single figure The Everest odds are Redzel and English.

Redzel ($7.50) has now recorded four wins on the trot and was dominant in both the Concorde Stakes and The Shorts, while English has been backed from $11 into $9 following her second place finish in the Premiere Stakes.