The Vanity Winner Bonvicini On Track for 2020 Australian Guineas

A tough day for punters continued at Flemington on Saturday as $26.00 pop Bonvicini won the Group 3 The Vanity for Ciaron Maher and David Eustace.

The three-year-old filly was first-up after winning two-from-five starts during the Spring but showed an impressive turn of foot on the outside to beat home second-elect Pretty Brazen at the line.

Bonvicini swooped in late four-wide after picking up stride at the 200m mark. With jockey Kerrin McEvoy on board, the pair lengthened over the final 50m to win by half a length – an impressive effort from barrier 8. 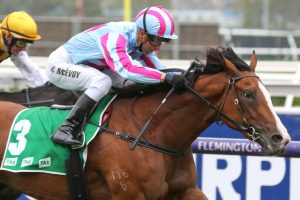 “We’d drawn out a bit and just came out quiet, got some cover. I was sort of three deep just following Damien Oliver,” McEvoy said.

“Thought the pace was a bit stronger after a furlong and a half, two furlongs. But she showed an elite turn of foot to pick up and get me into the race, and she pulled away from the favourite Pretty Brazen there in the last 100.

“She’s ran at a nice level. Didn’t have a lot of luck in a couple of races last spring, but she’s come back in good order there.”

The stable will now target the $1 million Group 1 Australian Guineas in two weeks’ time back at Flemington. Bonvicini has firmed into $31.00 ahead of the race, while the bookies weren’t discouraged by Pretty Brazen’s strong run to the line.

“She presented to win, just leveled a bit late. Luke (Currie) just felt, just with the top off that track, she’s not as effective on that and that she likes to be on a bit firmer ground. But very good return and she’s on target to run in the Guineas.”

Pretty Brazen has also firmed into a $21.00 chance for the Guineas.

There was no such luck for Saturday’s favourite Katalin, however. The Godolphin filly struggled to make up ground on the soft track, finishing fifth after sitting dead last at the final turn.