Vandyke convinced Lamasery is ready for the Metropolitan

October 5, 2012 by Mark Mazzaglia
Home > Vandyke convinced Lamasery is ready for the Metropolitan

A narrow win by Lamasery in the Hill Stakes at Randwick two weeks ago was enough to convince trainer David Vandyke the six year old was ready to tackle the Group 1 $400,000 McGrath Estate Agents Metropolitan (2400m) at Randwick tomorrow. 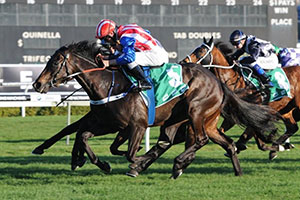 Last start winner Lamasery is ready for The Metropolitan according to trainer David Vandyke. Photo by: Steve Hart

Lamasery was having his third run back from a lengthy injury enforced lay off when he was able to nose out Mourayan in the Group 2 $200,000 Bacardi Hill Stakes (2000m) and promote himself to the top of the markets for the Metropolitan.

Vandyke is hoping to do better than last year when Lamasery finished third to The Verminator at the end of the 2400m and is looking to his fighting qualities to get him home this year.

“The horse has won three Group races and he’s won by a head, a head and a long head, he knows where the line is and he got to the line very well,” Vandyke said.

“When I looked at the noms for the Hill I thought Mourayan would be favourite so I was surprised when we were favourite ahead of him because he beat us at weight for age in Melbourne.”

From the inside gate jockey Peter Robl is certain give Lamasery the run of the race with the Gai Waterhouse trained Glencadam Gold likely to put on a solid pace.

“I’m very happy with the one gate, his head space and his fitness,” Vandyke said.

“We know he could get a strong 2400m this year and he’s been fortunate enough to have been able to run in all the right lead up races for this, in my mind.”

Robl has forged a good relationship with the six year old and as well as taking out the Hill Stakes, the top jockey was aboard when the pair ran home for third to Danleigh in the Group 2 $175,000 Tattersalls Club Chelmsford Stakes (1600m) at Warwick Farm on Saturday September 8.

One of Vandyke’s main hurdles in taking out the Metropolitan is the overwhelming presence at the Chris Waller and Gai Waterhouse runners.

Between them the two leading Sydney trainers will saddle up half of the twelve horse field with Waterhouse providing the favourite Glencadam Gold and outsider Reuben Percival while Waller will present Permit, Stout Hearted and Kelinni, all under double figures in the betting, along with last year’s winner The Verminator.

Of his four runners, Waller has a leaning towards Permit and Stout Hearted over his other two contenders.

“Permit is the best suited but Stout Hearted has probably got more class than him and Kelinni is the stayer on the rise,” Waller said.

“Stout Hearted is on the perfect step with two weeks into the Metrop, I don’t think the distance will be any problem but he does need to settle.”

“I think Permit is the benchmark but the other two have the ability to beat him, and The Verminator proved himself last year. We’ve got four horses with legitimate chances, they all need to run career best races to win.”

On the twentieth anniversary of Te Akau Nick winning the Metropolitan to provide Waterhouse with her first Group 1 victory, the $3.40 favourite Glencadam Gold could give the Randwick master trainer her eighth win in the 2400m Group 1.