The punters will not shy away from a return to winning form by the Mick Price & Michael Kent Jnr-trained Profiteer who is the clear favourite and market mover for Saturday’s rescheduled Group 1 $3.5 million Longines Golden Slipper (1200m). 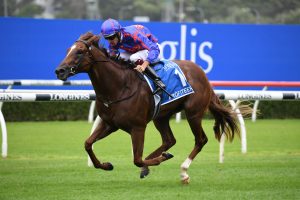 After last Saturday’s abandoned meeting, the postponed Slipper Day card runs this weekend at Rosehill Gardens on a likely Heavy (8) track with the actioned headlined by the two-year-olds doing battle in the Golden Slipper 2021.

The line-up for the world’s richest race for juveniles is down to 15 runners after the early withdrawal of the Chris Waller-trained O’President (8) who came out on Thursday due to an elevated temperature.

Markets on the event at Ladbrokes.com.au have talented Capitalist colt Profiteer on top at $3.60 and firming to atone for his last start loss.

A winner of his opening two starts including the barnstorming five-length romp home fresh in the $2 million Inglis Millennium (1100m), things went amiss at the start of the month in the Group 2 Todman Stakes (1200m).

Profiteer began near odds-on territory but pulled hard throughout and got run down late to finish second to Anamoe in his Slipper lead-up.

He gets the chance to make up for that and turn the tables on Anamoe ($17) here and the punters are happy to forgive and forget with Profiteer drawn well in barrier five for jockey Hugh Bowman.

The danger occupying the second line of Golden Slipper Stakes betting at $4.60 is another Todman graduate looking to return to winning form in Stay Inside.

Drawn closer to the rails in barrier three with two-time Slipper winning hoop Tommy Berry aboard, the Richard & Michael Freedman-trained Extreme Choice colt was luckless when fourth in the Todman.

It was a huge late run after he was last on the turn following an awkward jump, and held up at the 200m costing him a top three performance.

Prior to that he thrived on a rain-affected track to win the Pierro Plate by four lengths carrying 57kg and he should relish the softer going third-up on the weekend.

In the past four years three fillies have beaten home the boys in the Golden Slipper results with victories by: She Will Reign (2017), Estijaab (2018) and Kiamichi (2019).

The best of the girls looking to put the fillies back on top after the win by Farnan (2020) last autumn is the undefeated John Sargent-trained Four Moves Ahead.

The progressive daughter of Snitzel is two-from-two coming into her acid test on the weekend where she pays $5.50 to go to the next level from gate 10 (into 9) with Nash Rawiller riding.

She debuted in early January on a Heavy (8) Kensington track and was dominant before her narrow win nearly two months later on February 27 in the Group 2 Sweet Embrace Stakes (1200m) on Soft going.

Another Heavy track having been kept fresh and Four Moves Ahead is a definite winning hope.

Returning Neds Blue Diamond champion Artorius ($9.50) rounds out the single-figure hopes at Ladbrokes.com.au to take out the feature in his first Sydney start.