Trumbull added to his outstanding first-up at Royal Randwick on Saturday by taking out the Group 3 Sydney Stakes (1200m) in his return to the races.

Kim Waugh’s troublesome five-year-old has notoriously missed the jump in several of his 20 starts to date, but the in-form Tommy Berry managed to keep him in line among a tough field of sprinters to win narrowly at the line.

Prime Candidate got out to the front from the barriers and managed to hold that position coming into the turn.

Berry tracked into the straight three-wide on the outside of Tactical Advantage before Trumbull’s explosive turn of foot took over to reel in the leader. 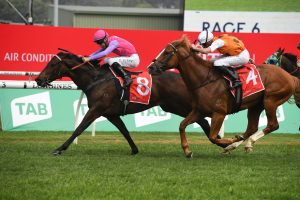 Trumbull is set to start in the $1 million The Hunter at Newcastle on November 14. Photo: Steve Hart.

The pair kicked clear at the 200m mark and had just enough left in the tank to hold off a late swooping challenge from Standout, leaving Berry, who had already ridden two winners by that point in the day, with his third.

“I was very confident the way he was standing in the gates today that he was going to jump, which is half of his issue” Berry said after the race .

“When he did I thought they’d go a bit quicker than that early and provide a spot for me but that didn’t happen. I was able to put Nash in a pocket at the right stage, which I was pretty pleased about because I’ve ridden Standout and know how good he is”

Trumbull won the Listed Civic Stakes (1350m) at Rosehill during the Autumn, but has always been a tough horse for punters to trust based on his barrier manners.

Despite having won three races first-up, the New Zealand import still went around at juicy $14 odds in Ladbrokes’ market – a fill-up for anyone brave enough to back him.

“He was three deep without cover and I was very worried because he loves a tuck and finishes off so strong but Tommy was just so patient with him knowing that” trainer Kim Waugh said.

As for what’s next, Waugh seems to think the $1 million The Hunter at Newcastle on November 14 is right in Trumbull’s wheelhouse.

“There are some very nice races for him. The Hunter looks very nice, seeing we’re not very far from there at the Central Coast” Waught went on to say.

Standout was having his third run back from a spell and showed plenty of improvement after finishing fifth in the Group 2 Premiere Stakes a fortnight ago over the same distance.

There was no such luck for $2.80 race-favourite Deprive meanwhile, as jockey Rachel King found herself dead last at the 250m mark before running fifth.