Trainer Barry Baldwin is hoping track specialist Mr Light Blue can regain his winning form when he lines up in the Listed $200,000 Channel 7 Ipswich Cup (2150m) at Ipswich on Saturday. 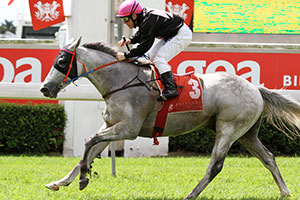 Mr Light Blue’s return to Ipswich will be one of his Winter Carnival’s easiest assignments, having won over this distance twice from two attempts.

The Fantastic Light four year old kicked off his winter campaign in fine style with a win over 1600m at Eagle Farm on March 31 before being thrown in over his depth in Group company.

Mr Light Blue was then beaten less than three lengths when seventh to Fantastic Blue in the Group 3 $125,000 Channel Seven Premier’s Cup (2200m) at Doomben on May 26 indicating that he will be a major player in Saturday’s Ipswich Cup.

“He can be a bit of a handful before his races, especially at Doomben, but he seems to behave himself at Ipswich, so we are keen to take him back there,” Baldwin said.

“It’s a big plus having won there and I think it looks a nice race for him.”

“We were going to run in the Brisbane Cup but when it became quite obvious it was going to be a wet track, we didn’t bother starting,” he said.

“It was a very strong Brisbane Cup and we wouldn’t have got hot on the wet track.”

International jockey Jeff Lloyd will be the fourth rider for Mr Light Blue in as many starts and will have to let the grey roll forward from a wide barrier.

The Ipswich track has been rated a dead 5 on Thursday afternoon and with fine weather forecast for the remainder of the week, a good racing surface can be expected for Saturday.

Premiership winning jockey Chris Munce is set to team up again with Gai Waterhouse when he partners Kinnersley in the Ipswich Cup.

Some of Munce’s biggest wins have been for Waterhouse and include Golden Slippers, Magic Millions and a Caulfield Cup.

Kinnersley booked a start at Ipswich with a solid win in the Listed $100,000 Masterton Homes Lord Mayor’s Cup (2000m) at Rosehill on May 12 and Waterhouse has kept the Al Maher five year old tuned up with a Warwick Farm barrier trial win.

Topweight Ginga Dude will have to set a weight carrying record if he is to win the Ipswich Cup after being handicapped with 60kg.