Dual Group 1 winner Tosen Stardom is one of three Darren Weir trained horses included in the 2018 Futurity Stakes nominations at Caulfield on Saturday. 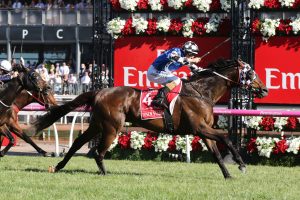 Tosen Stardom has been included in the 2018 Futurity Stakes nominations. Photo by: Ultimate Racing Photos

Last year’s Australian Cup winner Humidor and Japanese import Brave Smash are the other two Weir horses among the fourteen nominations for the weight for age Futurity Stakes.

Weir will decide later in the week if Tosen Stardom will take his place in the final field after the leading trainer admitted that the Japanese import has taken longer than he had expected to recover from a tough first up run when eleventh to Hartnell in the Group 1 $500,000 Ladbrokes C.F. Orr Stakes (1400m) at Caulfield on February 10.

Weir was also hinting that Tosen Stardom might have to miss the Group 1 $1.5m Australian Cup (2000m) at Flemington on March 10 if he doesn’t pick up in time.

“He’ll be fine but we’ll just poke around with him and probably change plans a bit now and maybe go to the Blamey (Stakes) to give him some time to get over the run and then head up to Sydney for the Carnival.

“It (Australian Cup) is unlikely, I’m not set in concrete with that but knowing how horses need to have the first-up run to get to their goal, it wasn’t the ideal run so I’d say it will be hard to get to the Australian Cup in the right order.”

Humidor is also unlikely to defend his Australian Cup title after not being able to kick off his 2018 Autumn Carnival campaign until this week in the Futurity Stakes.

“He’s just a fortnight behind the rest of them,” Weir told RSN’s Racing Pulse on Friday.

“He’ll run next Saturday in the Futurity, go into the Blamey and then head up to Sydney.”

Brave Smash is the fittest of the three Weir Futurity Stakes nominations with two Autumn Carnival runs under his belt, a first up fifth to Thronum in the Group 2 $200,000 Australia Stakes (1200m) at The Valley on January 26 followed by a slashing third behind Hartnell and Single Gaze in the Ladbrokes C.F. Orr Stakes.

Emerging star Booker is also among the nominations for the Futurity Stakes and as well as being entered for the Group 2 $200,000 Ladbrokes Angus Armanasco Stakes (1400m) for the three year old fillies and the Group 1 $500,000 Ladbrokes Oakleigh Plate (1100m) on the same program.

The Mathew Ellerton and Simon Zahra trained Booker showed that she is in for a good Autumn when she resumed for an all the way win in the Group 3 $150,000 Kevin Hayes Stakes (1200m) on February 10.

Trainer Mick Price will keep to his plan to run Mighty Boss at weight for age against the older horses and has nominated the Caulfield Guineas winning three year old for the Futurity Stakes.

Mighty Boss was beaten just under a length when a first up seventh to Hartnell in the Ladbrokes C.F. Orr Stakes.