Master Of Design trainer David Payne has ruled out any chance of the TJ Smith Stakes winner taking on superstar filly Atlantic Jewel in the All Aged Stakes at Randwick next Saturday.

Payne said he was happy for the six-year-old to instead have an easy few weeks before starting preparation for an assault on the Group 1 Stradbroke Handicap in Brisbane. 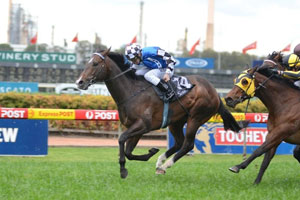 Unbeaten three-year-old Atlantic Jewel is being considered for either the All Age Stakes or the Emancipation Stakes but Payne was happy to avoid any chance of taking on the much-hyped filly.

“That filly is something else. Thankfully she didn’t go for the TJ Smith,” Payne said.

“I’ll give Master Of Design a couple of easy weeks and then we’ll get him ready for Brisbane.”

The TJ Smith win was the first at Group 1 level for Master Of Design who also scored an expenses covered trip to Brisbane for the Stradbroke as a result of the victory.

With star colt Foxwedge and quality Sydney sprinter Rain Affair both racing in the TJ Smith on Saturday, the six-year-old was given little consideration by the punters but was ridden terrifically by Craig Williams to claim a tight victory from Rain Affair.

Speaking after the race, Payne was relieved that MasterOf Design had finally lived up to his Group 1 potential after proving to be somewhat problematic.

“He’s been a problem horse but he’s got so much ability. At least he’s delivered,” Payne said.

A son of Redoute’s Choice, he has scored seven wins from 17 starts and with the highly lucrative TJ Smith under his belt, has now collected more than $900,000 in prize money.

He will get a chance to add to that pool in the $1 million Stradbroke Handicap which will take place on June 9 as one of the key events at the Brisbane Winter Carnival.