Champion trainer James Cummings will be hoping two-year-old filly Thermosphere can follow in stablemate Kiamichi’s footsteps next week in the $3.5 million Golden Slipper.

The daughter of Exosphere was a double-digit chance in Saturday’s Group 3 Magic Night Stakes (1200m) at Rosehill, hoping to earn Cummings his first spot in the Slipper after dominating the field last year. 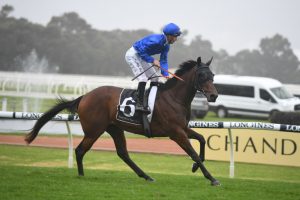 Godolphin accepted six last year with Kiamichi, who won the Magic Night in the leadup before beating stablemate Microphone by a length in the Slipper.

Exosphere was overlooked by the bookies at the $20.00 quote despite winning on a heavy 9 at Beaudesert last month. Fortunately, some late rain turned up on Saturday before the jump, which turned into a positive for James McDonald down the straight.

Thermosphere wasn’t listed in Ladbrokes’ All-In market prior to the race but is now a $31.00 chance ahead of a potential backup next week at Rosehill.

Cummings said after the race that the win reminds him a lot of Kiamichi’s last year, who also won on rain-affected ground.

“This is a classy filly. She has the right credentials and excellent temperament. We thought she had a little bit of ability last year but she has come along and kept improving and has the temperament to keep showing that” Cummings said.

“Kiamichi won on the rain-affected seven days out last year. That proved to be vital on a day that was completely bottomless on Slipper day which was a good day for Godolphin. As far as the Golden Slipper goes we will have a talk about it and we’ll get through the next few days.”

Thermosphere showed a tremendous turn of foot to get to the front at the 200m mark before holding off Time Is Precious on the outside.

The Gerald Ryan filly lost no admirers running second, while Jemss also looks to be one to watch moving forward flashing home late for third.