The Everest will be held at Royal Randwick on Saturday and all 8 of the 12 runners in the $10 million race have been included in the 2017 Manikato Stakes first acceptances. 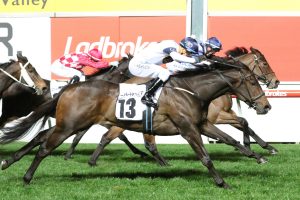 She Will Reign has been included in the 2017 Manikato Stakes first acceptances. Photo by: Ultimate Racing Photos

Chautauqua recorded a simply outstanding win in the Manikato Stakes in 2017 and he is a chance to contest the Group 1 event for the third year on the trot along with fellow The Everest runners She Will Reign, English, Vega Magic, Fell Swoop, Redkirk Warrior, Redzel and Clearly Innocent.

She Will Reign showed a real liking to The Valley when she won the Moir Stakes in impressive fashion and she will have the opportunity to become the first horse since Spinning Hill in 2002 to complete the Moir Stakes/Manikato Stakes double.

No three-year-old has won the Manikato Stakes since Sepoy was successful in 2011, but a number of promising three-year-olds could join She Will Reign in the Group 1 event.

The 2017 Coolmore Stud Stakes is the major target for talented colt Snitzel and he could take on the older horses in the Manikato Stakes on his way to the Group 1 event at Flemington on Victoria Derby Day.

Jukebox started his racing career with three straight wins and he was not disgraced when he was beaten by star filly Catchy in the Group 2 Danehill Stakes (1200m) at Flemington on September 16.

Ladbrokes Caulfield Guineas Prelude runner-up Summer Passage is the only other three-year-old that has been included in the 2017 Manikato Stakes first acceptances.

In Her Time missed out on a position in The Everest, but she could have a chance to claim a maiden Group 1 victory in the Manikato Stakes.

The Time Thief mare returned to the races with a win over the likes of English, Fell Swoop, Clearly Innocent and Chautauqua in the Premiere Stakes, but she was still unable to earn a berth in The Everest.