The Everest barrier draw has been conducted ahead of the historic $10 million event that will be held at Royal Randwick on Saturday. 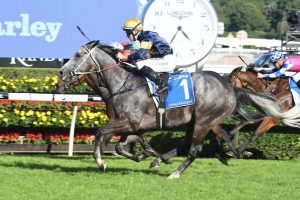 Chautauqua is one of a number of winning chances in The Everest. Photo by: Steve Hart

It is She Will Reign that is currently on top of The Everest betting market with Ladbrokes  – following her impressive victory in the Group 1 Moir Stakes (1000m) at The Valley – and the Golden Slipper winner was allocated barrier two.

Both trainer Gary Portelli and jockey Corey Brown were delighted with barrier two and Portelli said that he could not be happier with the star filly ahead of The Everest this weekend.

“She will take the shortcut home,” Portelli said.

“We were pretty happy with the way that our filly worked this morning.

“She has been set for this one race – we were lucky enough that when we won the Golden Slipper we had been invited to run in the race and we were able to have a long-range preparation.

“There was no pressure to have a qualifier and we have had a fantastic preparation.

“I just can’t believe the way that she won the other night.

“She is tough bugger and she has bounced back really quickly.”

Chautauqua has missed the placings in her two race starts during his 2017 Spring Racing Carnival campaign to date, but co-trainer Michael Hawkes remains confident that the popular grey is going just as well as ever.

Hawkes could not have been more delighted about drawing barrier five and he revealed that was the exact barrier his father John Hawkes requested before the start of The Everest barrier draw.

“We are pretty happy with the horse and he worked pretty good this morning,” Hawkes said.

“It is a high quality field and his two runs have been really good – although he hasn’t won.

“His times and his sectionals are saying that he is still on song and we are very happy with him.

“He has been set for this race.”

The Lindsay Park team are the only stable with multiple runners in The Everest field and they are represented in the $10 million race by Redkirk Warrior (barrier three), Vega Magic (barrier 10) and Tulip (barrier 9).

Co-trainer Ben Hayes was initially disappointed with the wide barrier draws of Vega Magic and Tulip, but after talking to his father David Hayes he believes that the wide gates could prove to be an advantage.

“We drew two wides one, but that might not be a bad thing in the long run,” Hayes said.

“We will have a good look at the race and we will make tactics one I have spoken to Dad and Tom.”

It was English that was allocated the outside gate at the 2017 The Everest barrier draw and jockey Blake Shinn was a touch disappointed, but he confirmed that he will likely settle towards the tail of the field with the daughter of Encosta De Lago.

“We will ride her quiet,” Shinn said.

“They are going to go very fast.

“Ideally I would have drawn in a little bit more to slot in front of three or four and we still might be able to do that as the race unfolds.

“English has a devastating sprint and we will be riding her to her strengths.

“Hopefully they overdo it in front and we are the last one on the scene.

“I think she is going great and she has improved each run.

“The Everest has been the ultimate goal this preparation and Gai and Adrian have her absolutely spot-on for this weekend’s race.”