The Epsom Handicap remains firmly on the cards for classy Kiwi galloper Te Akau Shark who looked impressive in a fast-finishing run across the Tasman when narrowly beaten at Te Rapa on Saturday. 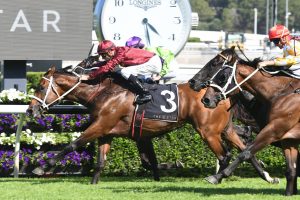 Prepared by Jamie Richards at Matamata in New Zealand, the five-year-old son of Rip Van Winkle had a sensational five-from-six record heading into this weekend’s Group 2 Foxbridge Plate (1200m).

The two-time Group winner had his first look at a Heavy-rated track in the weight-for-age sprint feature.

Te Akau Shark was far from disgraced fresh in his first loss since the close fourth behind Embellish in the Group 1 NZ 2000 Guineas (1600m) in November of 2017.

Despite disappointing the punters as the beaten $2 favourite, his powerful finish in the event is sure to keep him in favour ahead of his trip down under.

Top hoop Opie Bosson made up late ground having settled second last in the Foxbridge fieldon the boom Kiwi.

The dynamite duo powered home over the closing stages and crossed three-quarters of a length off the winner, Tony Pike’s Stradbroke Handicap third-placegetter Endless Drama.

The proven miler, part-owned by Rugby League great and current Cronulla Sharks captain Paul Gallen, will only improve on his eye-catching return to racing.

He is Australian-bound this Sydney Spring Racing Carnival and already leading pre-nomination betting at Ladbrokes.com.au at $6 to win the Group 1 $1 million Epsom Handicap (1600m) at Royal Randwick on October 5.

Richards told the media post-race that it was still “all systems go” towards the Epsom via a lead-up run at Randwick on September 7 in the Group 2 Tramway Stakes (1400m).