Tattersall’s Cup can be quick back up for Sampson

June 17, 2019 by Mark Mazzaglia
Home > Tattersall’s Cup can be quick back up for Sampson

Ipswich Cup runner up Sampson will take advantage of the increase in distance for Saturday’s Group 3 $200,000 Lazy Yak Tattersall’s Cup which will be run for the first time over 3000m at Eagle Farm. 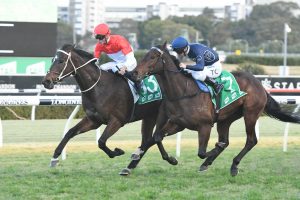 Bergerac, above in red and white colours (pictured at Randwick) was the winner of the 2019 Ipswich Cup. Photo: Steve Hart.

“He looks an excellent chance in the Tatt’s Cup this weekend as the 3000 metres will be perfect for him while there is also the option of the Caloundra Cup a week later if he pulled up all right,” Mathews told the NZ Racing Desk.

“A month later there is the Queensland Cup at Eagle Farm again so we are a little spoiled for choice if he can maintain his form and the handicapper treats him well,” Sampson said.

“He is loving it over here as it is like being at home in the summer.”

“It is normally around 27 degrees and he has blossomed.

“He has certainly paid his way and there are numerous other opportunities for him that are coming up over the next few weeks.”

Sampson is the winner of eleven races in New Zealand with his most recent victory being in the Listed NZ$50,000 NZ St Leger (2600m) at Trentham on March 16.