The Ciaron Maher & David Eustace-trained Tanker is one of five two-year-olds lining up across the two Blue Diamond Preview races this weekend at Caulfield and is a genuine winning hope in the edition for colts and geldings. 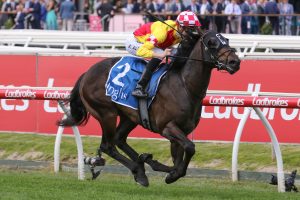 Tanker is one of the key 2020 Blue Diamond Stakes hopefuls lining-up in the Preview races at Caulfield for Ciaron Maher & David Eustace this Saturday. Photo: Ultimate Racing Photos.

Co-trainer Eustace is full of pre-race confidence with well-bred Pride Of Dubai colt Tanker ahead of Saturday’s Listed $160,000 Neds Blue Diamond Preview (C&G) over the 1000m.

He has his first run since this weekend in the lead-up towards the Group 1 $1.5 million Neds Blue Diamond Stakes (1200m) held back at Caulfield on February 22.

That opens things up for an upset according to Eustace who believes Tanker could be the value bet at $3.50 from a more favourable gate six start.

“It’s an interesting race [on Saturday].

“I think Hanseatic has been the most impressive two-year-old from another stable for sure. But he’s drawn a little bit awkwardly and we’ve got a nicer gate so we’re very happy with our fellow.

“It’s not his grand final by any means, he’s only had the one jump out and will improve for it, so it won’t be all about Saturday.

“We’re confident he’s going to be able to mix it at this level and get to the Blue Diamond which is his grand final.”

He then ran at Rosehill in November’s $1 million Golden Gift (1100m) but could only manage to finish six and a half lengths back fifth behind the Golden Slipper-bound winner Dame Giselle.

Jockey Mark Zahra comes aboard for the Blue Diamond Preview on Tanker, Zahra having ridden Sepoy to victory in the race back in 2011.

Tanker is joined in the Blue Diamond C&G Preview field by stablemate Toscanini ($19), a two-year-old son of Fastnet Rock coming off a fourth on debut at Geelong on January 9.

“We felt he was the best horse in the race [at Geelong]; he got back, showed greenness and then hit the line very strong. He’ll have taken a lot from that,” Eustace said of Toscanini.