Super Cash returned to the races with a typically gallant win in the 2017 Schillaci Stakes at Caulfield this afternoon. 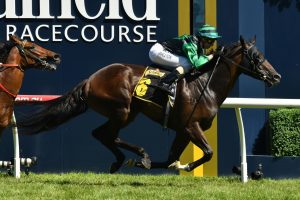 Super Cash returned to the races with a win in the Schillaci Stakes. Photo by: Ultimate Racing Photos

It was Illustrious Lad that hit the front and looked like the winner at the 150 metre mark – as pre-race favourite Sheidel faded – but Super Cash was able to wear down her rival in the shadows of the post to claim another first-up victory.

Jockey Katelyn Mallyon combined with trainer Andrew Noblet to claim a maiden Group 1 victory when she rode Silent Sedition in the William Reid Stakes and she was delighted to claim another black-type win for one of her biggest supporters.

“I am so lucky to have Andrew Noblet and all the owners be so supportive,” Mallyon said.

“She is a ripping horse, especially first-up and Nobby placed her terrifically.

“It is great to get a win over the Spring Carnival with her.

“She does everything that I ask and hopefully we can get a deserved Group 1 with her because I think that she is good enough.

“Hopefully she can go on with it.

“Nobby has been fantastic and I am very lucky to be apart of the stable.”

The Moir Stakes was the original first-up target for Super Cash, but she failed to get a start in the race and Noblet was forced to change his path with the talented mare.

Noblet said that missing the Moir Stakes was a blessing in disguise for Super Cash and he is now unsure what path she will follow for the rest of her 2017 Spring Racing Carnival campaign.

“She goes really well fresh and I was pretty confident heading in,” Noblet said.

“She is just such an honest mare.

“She only had the one trial at Sandown a while back – we had her set for the Moir, but she missed a run and that was probably a blessing now.

“To get a nice race under her belt going into the Autumn is fantastic.

“It depends (her Spring Carnival path) on how she pulls up.

“She feels the ground, but the track was perfect there today and hopefully she comes through it well and we can plan from there.”

Illustrious Lad was gallant in second in the Schillaci Stakes, while Rock Magic finished strongly to finish in the placings.