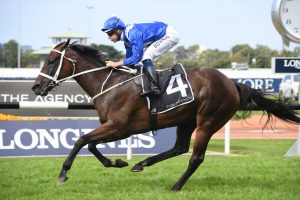 The Caloundra Cup Day feature made famous by Winx in 2015 featured 15 hopefuls including Casino Prince filly Baccarat Baby backing up off her unplaced run at Eagle Farm against the older mares in last weekend’s Group 1 Tattersall’s Tiara (1400m).

She relished the return home back up over a mile against her own age, Baccarat Baby also well-suited to the Heavy (10) Sunshine Coast track.

Vandyke made the late call to run the up-and-comer in the Group 3 on Monday after she pulled up off the luckless Tiara run in excellent order, shelving plans to head straight to the paddock.

“I tell you what, she said to me [on Monday] ‘I’m not done with yet, let’s go again,” the winning trainer said after the race.

“She’s just had a brilliant week. She’s been jumping out of her skin.”

Instead she continued her lengthy prep with one last run, which she and regular rider Micheal Hellyer dominated by three lengths on the line after a tough run on the mud track three-wide without cover.

“She’s had such a great preparation…I couldn’t have asked any more from her.

Despite being forced wide, Baccarat Baby showed great maturity switching off nicely in the run and relaxing beautifully as the Waterhouse/Bott filly Statuesquely led the field around.

Hellyer showed great confidence in the filly allowing her to get into her groove before coming for them down the outside on the straight and bolting home.

Jump favourite Junipal wound-up late and finished strongly in a game second, while the Peter & Paul Snowden-trained filly Zavance held the lead at one stage before getting run down for third.

“At about the 500m I thought ‘she can’t win with the hard run she’s had, I hope she hangs on for third and pulls up alright,” Vandyke said.

“I’ve had better horses, but none tougher. She’s been in work since November.

“It was testing [today]. She had a hard run and she just kept finding.”

Baccarat Baby retained her undefeated home track record with a fourth Sunshine Coast success from as many starts and now heads out for a well-earned break.

She looks set to win an even bigger race upon her return in the spring, out to continue the gun form out of the Sunshine Coast Guineas with three of the past four winners going on to salute at the highest level.

Last year’s champion was The Bostonian (2018) who took out the Group 1 Doomben 10,000 / Kingsford-Smith Cup double at this year’s Brisbane Winter Racing Carnival.