Two-year-old colt Mamaragan has thrown his name into the hat for the $3.5 million Golden Slipper on March 21 thanks to a very impressive win on debut in the Group 2 Skyline Stakes at Randwick.

The John Thompson-trained colt by Wandjina went around as a $19.00 chance on Saturday with Blake Shinn on board – the champion hoop returning to Australia following a stint in Hong Kong.

In what was a tightly bunched field at the final turn, Shinn found himself sitting one off the fence at the 150m mark before taking full advantage of Mamaragan’s early speed to take the lead. Postcode and Tim Clark posed a late challenge on the inside, but the pair found something extra at the 100m mark to win by a length. 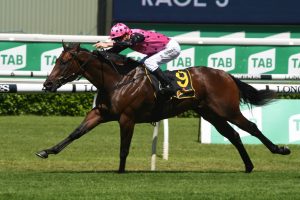 Two of the last 10 Skyline Stakes winners went on to win a Group 1. Photo: Steve Hart.

Mamaragan has now firmed from a whopping $101 into $31 with Ladbrokes.com.au for the Group 1 Golden Slipper at Rosehill and, not surprisingly, Shinn thinks he is a chance.

“The horse has got lots of natural ability. He’s an early type, he’s proven that. He’s raw, you’re only a two-year-old once and he’s won the lead up to the Slipper in fine style” Shinn said.

Mamaragan is now hoping to become the first horse since Dance Hero in 2004 to complete the Skyline-Slipper double, but that might be the furthest thing from Thompson’s mind.

The two-year-old will be Thompson’s first-ever Slipper runner and, like Shinn, he thinks the horse’s early speed makes him a serious chance.

“He was the only one I accepted with. He just looked a goer early. I’m not one to try and get Slipper runners, he’s just been a natural from day one. It’s great to have one in it” Thompson said.

“I’m sure he will do well, he was a good doing colt with a great attitude and it’s exciting.”

There was no such luck for race-favourite Prague meanwhile, who struggled to find the line after bursting clear at the 200m mark. The colt by Redoute’s Choice has been bumped out to a $31 shot for the Slipper, with the full market available here.