Shillelagh Can Hit Her Best Form In 2018 Futurity Stakes

Sydney’s premiership winning trainer Chris Waller is hoping that his Group 1 winning mare Shillelagh can hit her best form when she steps out in the 2018 Futurity Stakes (1400m) at Caulfield on Saturday. 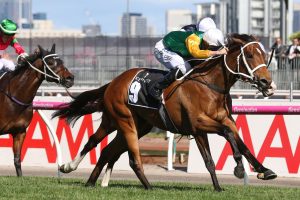 Shillelagh was crowned a Group 1 winner during the 2017 Melbourne Spring Carnival with a narrow victory in the $1m Kennedy Mile (1600m) on the first day of the Melbourne Cup Carnival at Flemington.

The former New Zealand trained mare was then sent for a break before resuming for the Autumn Carnival with a lacklustre tenth to Hartnell in the Group 1 Ladbrokes C.F. Orr Stakes at Caulfield on February 10.

Waller said that the run was disappointing at first glance and is hoping Shillelagh can turn her form around and race up to her Spring performances.

“She was little disappointing first up but all things considered she only got beaten two lengths so the run probably wasn’t as bad as we all think,” Waller said.

“Her work since her first up run has been good so we are hoping she can improve.”

Shillelagh will jump from the outside of the eleven horse Futurity Stakes field and jockey Michael Dee will be hoping he gets his fair share of luck in the early and middle stages.

Betting for the Futurity Stakes at Ladbrokes.com.au has seen Shillelagh drift from $10 to $12 on race eve while the first of Darren Weir’s three runners Brave Smash sits at the top of the market order at $3.60.

The Mick Price trained three year old Mighty Boss is next in the betting at $5.50 ahead of Weir’s other two runners Tosen Stardom at $6 and Humidor at $7.50.

The favourite Brave Smash has also drawn wide at barrier nine with Craig Williams in the saddle while Mighty Boss with Michael Walker on top will get a good run from gate three.