Sesar will head to Melbourne for the 2018 Carbine Club Stakes after he recorded an impressive win in the Roman Consul Stakes at Royal Randwick this afternoon. 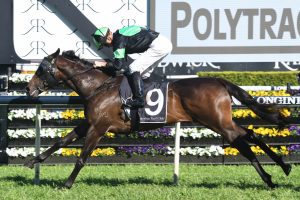 Sesar stamped himself as a serious colt with an impressive win in the Roman Consul Stakes. Photo by: Steve Hart

There was a huge amount of speed in the early stages of the Roman Consul Stakes and Sesar did not have the early toe to go with the field, with Jason Collett forced to get into the three-year-old a long way from home.

Sandbar gave a kick at the top of the straight and looked like the winner, but Collett timed his run to perfection on Sesar and he savaged the line in the final 150 metres of the race to record a very strong victory.

Trainer Steve O’Dea recorded his first win in Sydney when Doubt Defying won at Royal Randwick earlier in the day and he was clearly delighted to see Sesar stack up at Group 2 level in the Roman Consul Stakes.

O’Dea admitted that he did consider sending Sesar to Melbourne for the Coolmore Stud Stakes, but he is adamant that the Sebring colt will be better over further and he confirmed that the three-year-old will contest the Listed Gothic Stakes (1400m) at Caulfield on October 20 before he heads to the Group 3 Carbine Club Stakes (1600m) at Flemington on Victoria Derby Day.

“It really is satisfying to get this colt to come here first up as a three-year-old,” O’Dea said.

“I can’t say I wasn’t worried in the first half of the race when he was off the bridle chasing.

“He was starting to struggle coming to the turn, but the run came on the fence and there was plenty of room there.

“He went through his gears.

“Being a colt there were thoughts of going to the Coolmore but with the run under his belt he could be run off his legs so there is the Gothic at Caulfield over 1400m and then Carbine Club Stakes.”