Sepoy to go out a winner in July Cup

The Godolphin stable is looking forward to seeing their top sprinter Sepoy go out on a winning note when he lines up for the last time in the Group 1 £400,000 Darley July Cup (1200m) at Newmarket on Saturday. 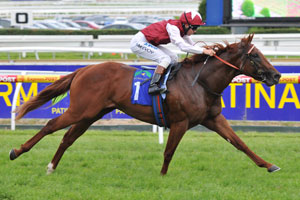 The four times Group 1 winner Sepoy will return to Australia to stand his first season at Darley’s Kelvinside Stud in the Hunter Valley for a $66,000 service fee and trainer Mahmood Al Zarooni is hoping the four year old can regain his best form for Sheikh Mohammed.

“When he arrived here (in Newmarket) he was a bit down. We gave him an easy time to recover. He has recovered and is in good form. He did a piece of work on Saturday and he’s showing that sort of form (as he did in Australia).”

The 2011 Golden Slipper winner had his last run for Darley’s Australian trainer Peter Snowden when a disappointing tenth to Krypton Factor in the Group 1 $US2m Golden Shaheen (1200m) at Meydan in Dubai on March 31 and was then transferred to Godolphin’s Newmarket operation under the care of Al Zarooni.

Sepoy will only have one chance to carry the famous royal blue colours to victory and Godolphin’s racing manager Simon Crisford is hoping that will be enough to show the Northern Hemisphere what a top class sprinter he is.

“We hope that he shows the Northern Hemisphere what a special horse he is,” Crisford said.

The Elusive Quality stallion carried on his Group 1 winning two year old form into his three year old year beating the older sprinters in the Group 1 $500,000 Sportingbet Manikato Stakes (1200m) at Moonee Valley in the Spring of 2011.

Sepoy will be coming up against another Australian Group 1 winner Ortensia in the July Cup.

Trainer Paul Messara has confirmed that Ortensia has recovered from minor injuries she sustained when ninth to the Hong Kong trained Little Bridge in the Group 1 £350,000 The King’s Stand Stakes (5 furlongs) at Royal Ascot on June 19.

“Prior to the King’s Stand she didn’t seem to handle the environment. She got upset in the pre-parade ring and broke out into quite a big sweat. By the time of the race she was very revved up and agitated and had run her race before she had even got there,” Messara said.

“She ran an average race and pulled up with a sore back but everything’s settled down now. We’ve had a couple of practices here which have been great and she’s done well. She’s done a good bit of work here and we’re hoping she will be a much (better) settled horse on the day.”

“Her last piece of work was excellent on the course proper here and she will have another gallop tomorrow. We are very pleased with her going into the race.”

In form local jockey William Buick will be the new jockey for Ortensia replacing regular ride Craig Williams who was unable to get a release from his Japanese contract to ride in England on the weekend.